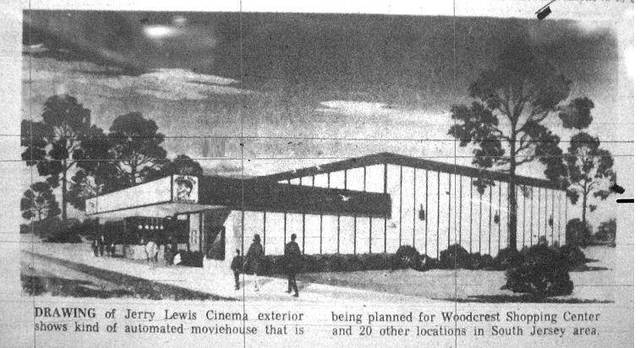 Built in the parking lot of the Woodcrest Shopping Center at Route 561 and Browning Lane (just off Interstate 295).

Originally opened September 16, 1971 as a Jerry Lewis Cinema, this house suffered a fairly typical fate for a theater from that concept; rebranding as an independent cinema, a brief run as an adult theater and ultimately conversion to a non-cinematic use, in this case a tire store.

I assume that by 1973, the theater wasn’t a Jerry Lewis Cinema anymore since they had a policy of showing only “family friendly” movies.

In the early-to-mid 1980s (prior to becoming Trio Tire), the theater became a video arcade named “Blast from the Past”. Spent many quarters there as a kid!