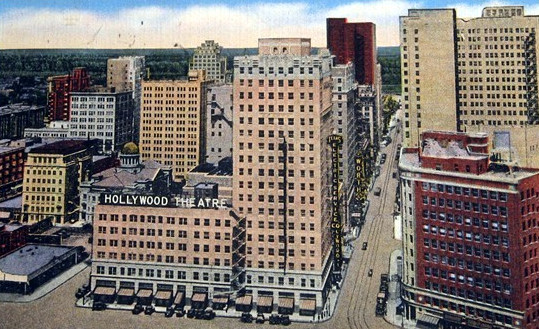 Built in 1929 by architects Alfred Charles Finn and Wyatt C. Hendrick, the eighteen story Electric Building and Hollywood Theatre were designed in Art Deco style, with stylized friezes on the building’s exterior of electricity-themed designs. The Hollywood Theatre was opened April 18, 1930 with Lila Lee in “Flight”.

For four decades, the string of theatres along 7th Street was Fort Worth’s Broadway, including the Worth Theatre, the Palace Theatre and the 7th Street Theatre. It was renovated in 1963 to the plans of architect Jim Vowell.

In the early-1970’s, as multiplexes began sprouting up around Fort Worth’s suburbs, the large movie palaces fell into quick decline. The Hollywood Theatre was among the last of the major houses to be shuttered, when on January 19, 1973 it screened Walter Matthau and Carol Burnett in “Pete ‘n’ Tillie”.

After more than two decades closed and crumbling away, the Electric Building and Hollywood Theatre were renovated into a luxury apartment tower. Unfortunately, while the magnificent Art Deco lobby of the Electric Building was stunningly restored, the former Hollywood Theatre was completely gutted and became a four level parking garage for the apartment building tenants.

The Electric Building was added to the National Register of Historic Places in 1995.

A postcard view of the Hollywood and Worth Theatres in downtown Ft. Worth.

From 1951 a newsprint photo of Randolph Scott promoting his world premier “Fort Worth” in front of the Hollywood.

The Hollywood Theatre underwent a $150,000 renovation in 1963, for operators Trans-Texas Theatres. An articlea bout it appears on this page of the January 13, 1964, issue of Boxoffice. The gala reopening took place on Christmas Day, 1963. Fort Worth architect Jim Vowell had designed the remodeling.

We over at SMU’s G. William Jones Film & Video Collection recently uncovered some news footage of the theater if anyone’s interested. https://youtu.be/Glb7ClzJqQo

This opened on April 18th, 1930 grand opening ad in the photo section. 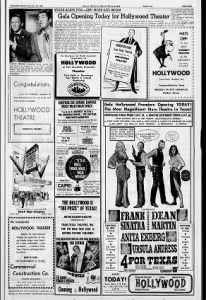