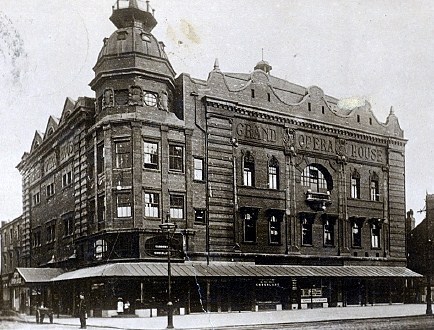 Located on the corner of Linthorpe Road and Southfield Road. The Grand Opera House opened on 7th December 1903 with a production of “My Lady Molly”, a light comic opera. It was designed by the architectural firm Hope & Maxwell with a seating capacity of 2,600, and standing room for 700. The corner entrance was topped by a small dome. The interior decoration was by A.R. Dean of Birmingham, and included a large ceiling dome, supported by marble pillars. Seating was provided in pit, orchestra stalls, dress circle, upper circle, gallery and amphitheatre, plus ten private boxes. The proscenium was 30 feet wide and the stage 40 feet deep. There were twelve dressing rooms.

Like other theatres in town, it was screening films as part of the programme in the early years. In May 1914, the Grand Opera House began a summer season of films, which were so successful, they extended through to November, when live theatre use resumed. In September 1916, the Opera House had an exclusive Middlesbrough run on "Birth Of A Nation".

It was taken over from Thomas Thompson by the Denman/Gaumont British Theatres chain in March 1928. The Grand Opera House was closed in June 1930, and the interior was totally gutted. Gaumont’s architects W.E. Trent and Ernest Tulley designed a modern cinema within the shell of the building.

It opened as the Gaumont Palace on 30th March 1931. Gone were the old two tiers of balconies and boxes, and the elaborate proscenium. Now there was a single circle, and the old stalls floor had been extended forward to where the old stage had been. A new square proscenium had a painting above it, which depicted all the industries which Middlesbrough was famous, and this was painted by Frank Barnes. A projection box was built at the rear of the stalls. A Compton 3Manual/8Ranks organ was installed, with organ chamber beneath the stage. The organ was opened by Leslie James.

It was re-named Gaumont in 1937. The Gaumont was closed by the Rank Organisation on 29th February 1964 with “The Longest Day”. It was soon demolished and an office block named Midland House was built on the site, occupied in 2009 by Thompsons Solicitors..

There is additional historical detail and pictures of the Gaumont over the years here.