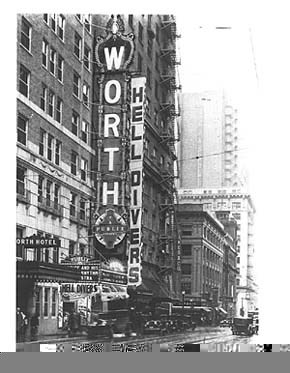 The Worth Theatre and adjoining Worth Hotel were designed in 1928 by Alfred Charles Finn and Wyatt C. Hendrick, who would also team up a year later to design the Electric and Hollywood Theatre Building and in 1930, the twenty-story Fair Building, all three marvels of early Art Deco style architecture in downtown Fort Worth. Additional design contributions were by John Eberson.

The Worth Theatre seated 2,484 and like its contemporaries on the Seventh Street ‘theater row’, the Hollywood Theatre and Palace Theatre, were major showplaces for several decades for both live and on-screen entertainment. In the early-1940’s, the Worth Theatre was operated by Paramount Pictures Inc. through their subsidiary Hoblitzelle & O'Donnell.

It wasn’t until the late-1960’s and early-1970’s, when multiplexes in the suburbs began to draw theater-goers away from downtown that the huge movie palaces of Fort Worth, like so many others around the country, began to fall into decline.

The Worth Theatre was closed in 1971 and was demolished not long afterwards. In 1975, the historic Fort Worth Club Building (also designed in part by Hendrick) of 1926 was expanded a half-block west, with a fourteen-story addition on the site of the former Worth Theatre and Hotel.

I attended and work at Worth Theater from 1968-71, I worked as a usher at the ripe age of 15 in 1969, I saw Hell Angels 69 there, love it, it had the best sound acoustics that you could ask far, between work and sports and I lived in the Projects over by Leonards Subway, attended Trimble Tech High and could use the 50 cents and hour job, it was simply a beautiful place, shame they demo it, thanks for the memory’s Jerry Cravy

Photo & copy added: Interior of the Worth Theater, shortly before it was demolished, 1972. Fort Worth Star-Telegram photo. (In Photos Section)

I have two beautiful sconces from the theatre that I purchased in mid 1980s. They are bronze parrots with stained glass. I need to sell as I am moving out of country. I can vaguely see them on old photos. I have them in my living room and they are quite beautiful. They are definitely Art Deco-Egyptian.

Mr Radominski do you want to sell the scones badly enough to post some photos & contact info?

At the University of North Texas, we are preserving the local television news station of Fort Worth (WBAP/KXAS/NBC), and I found this great footage of Elvis fans lined up outside of the Worth… https://texashistory.unt.edu/ark:/67531/metadc938275/

I have a friend that her father passed away recently he purchased some egyptian style statues out of what we think was the Worth Theatre ….. just needing some info and find out if there is any kind of historical significance they are and egyptian statue and 2 lions !

This May 30, 1964 news story from WBAP-TV shows the exterior and interior of the theatre when it hosted live television coverage of the Indianapolis 500! https://texashistory.unt.edu/ark:/67531/metadc1062738/

This opened on November 27th, 1927. Grand opening ad in the photo section.