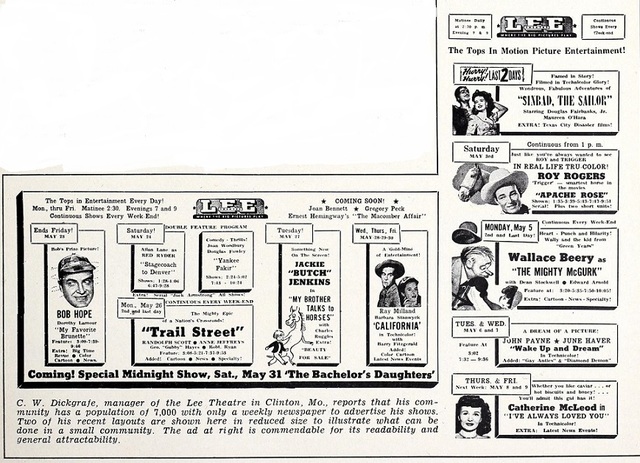 The Lee Theatre opened on March 16, 1927 in a conversion and expansion of an existing building by architect W.W. Walther. It had 560 seats in the orchestra and 325 seats in the balcony. In 1937 it was taken over be Commonwealth Theatres. It was one of five theatres in Clinton at one time. The Lee Theatre was one of the largest theatres in the town. All five were operated by Commonwealth Theatres.

The April 18, 1947, issue of The Film Daily reported that improvements were in store at the Lee Theatre:

“The Lee Theater, Clinton, Mo., a unit of the Commonwealth circuit, is being completely renovated and modernized. In addition to a complete repainting job, new carpeting and draperies will be installed, and new upholstered seats and RCA sound system provided. The walls are to be given acoustical treatment. A new refrigerated drinking system is to be part of the improvements. The house has also been provided with all-aluminum frames in the lobby and a Manley popcorn machine and large new lounges. Some $20,000 is being spent on the house.”

The July 11, 1947, issue of the Daily claimed a considerably larger seating capacity for the Lee Theatre than we have listed, but this was probably a typo:

“New Heywood-Wakefield chairs have been installed in the 1,777-seat Lee Theater, Clinton, Mo., of which C. W. Dickgrafe is manager. … It is a unit of the Commonwealth Amusement Corp., Kansas City.”

Being reseated in 1947 means that the house must have been at least twenty years old, and there was indeed a Lee Theatre in Clinton in 1928, when the October 28 issue of The Film Daily said that its owner, Lee Jones, had just purchased the Auditorium Theatre, also located in Clinton.

The Lee Theatre building, without its equipment, was offered for sale by Mrs. Lee Jones in an ad in the September 23, 1962, issue of the Kansas City Star.

A local eatting establishment called Square 109 is currently in the location of the Lee Theatre although a couple of years ago the owner did a complete remodel paying homage to the building’s past. There is a sign that along with the name of the business it also states “Historic Lee Theatre” and inside the décor is movie posters and pictures of classic Hollywood stars as well as an old photo of the exterior of the building when it was the Lee Theatre.

Lee L. Jones of Kansas City bought the Crancer Building in 1926 for conversion to what was going to be the Liberty Theatre. Architect W.W. Walther only left the from and side walls of the building in expanding the building’s rear to create an 885 seat theatre at opening with 560 main floor seats and 325 balcony seats. At opening Jones changed the name to the Lee Theatre which launched March 16, 1927. Its first sound film was “On With the Show” in 1927.

Ten years later, the Commonwealth Circuit took on the theatre. It closed November 10, 1959 with “Hound Dog Man.” When the updated Go-Sho Theater elsewhere in downtown was renamed the Crest Theatre, Commonwealth closed the Lee.

When the lease expired on the Lee at the end of August of 1962, its chairs were removed and moved to the Lyric Theatre in Harrison, Arkansas. On April 10, 1965, it was reopened as a live Country Music event venue still using the Lee Theatre nameplate. That lasted just three months with the Lee Theatre closing June 12, 1965.

Address is wrong. There are no odd numbers on Main facing the square. The correct address is 109 S Washington.