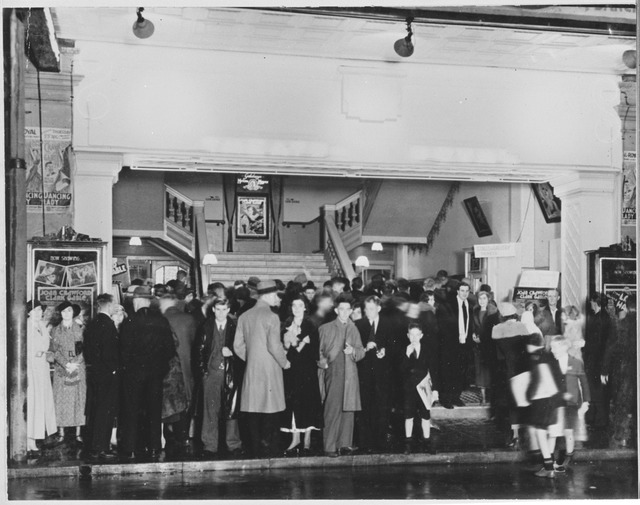 1933 - The film screening at the time was “Dancing Lady”. This is a 1933 American pre-Code musical film starring Joan Crawford and Clark Gable, and featuring Franchot Tone, Fred Astaire, Robert Benchley, and Ted Healy and His Stooges (who later became The Three Stooges with Curly, Moe and Larry). The picture was directed by Robert Z. Leonard, produced by John W. Considine Jr. and David O. Selznick, and was based on the novel of the same name by James Warner Bellah, published the previous year. The movie had a hit song in “Everything I Have Is Yours” by Burton Lane and Harold Adamson.

“Dancing Lady” features the screen debut of dancer Fred Astaire, who appears as himself, as well as the first credited film appearance of Nelson Eddy, and an early feature film appearance of the Three Stooges – Moe Howard, Curly Howard, and Larry Fine – in support of the leader of their act at the time, Ted Healy, whose role in the film is considerably larger than theirs. The Algonquin Round Table humorist Robert Benchley plays a supporting role.

Mark Nicol writes – The Royal was originally opened as a theatre on 19th April 1897 with stage productions and vaudeville it also presented earliest screenings of films in Perth.

By 1934 it was contracted as the MGM house for new release product. Renovations were carried out in 1938, to the plans of architect William T. Leighton, of the architectural firm Baxter-Cox & Leighton – Contributed by Greg Lynch –