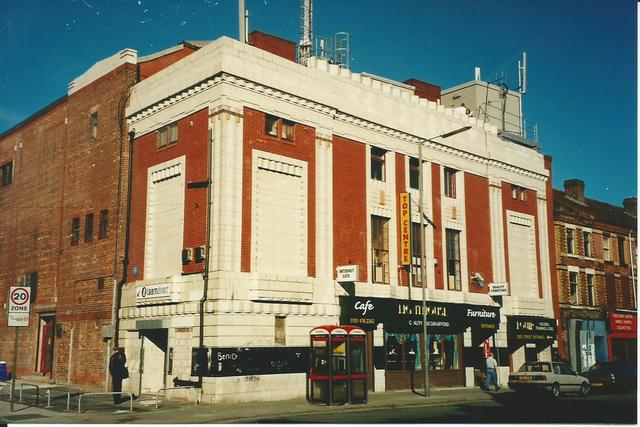 Located in the Anfield district of Liverpool at the corner of Oakfield Road and St. Domingo Vale. It was formerly the site of the King’s Hall, which had 1,000 seats and operated as a cinema from 1912 to July 1930, when it was closed and demolished.

The Gaumont Palace was built for and operated by the Gaumont British Theatres/General Theatre Corporation and opened on 21st December 1931 with Ronald Colman in "The Devil to Pay" and Wheeler & Woolsey in "Oh! Oh! Cleopatra". Seating was provided for 1,500, with 1,100 in the stalls and 500 in the circle. The proscenium was 40 feet wide, and there was a stage and dressing rooms.

Re-named Gaumont in 1937, it became part of the Rank Organisation and they closed the Gaumont on 26th November 1960 with Burt Lancaster in "The Unforgiven" and "Delta 8-3".

It became and Appleton’s store, followed by a D.I.Y. hardware store. In 1998 it was converted into a religious gospel music & arts centre known as the Liverpool Lighthouse, which has a seating capacity of 430. It is planned to re-open as a community cinema later in 2021.

If you click on the official website link (above) and then on the Venue panel, you can see pictures of what the auditorium (now called King’s Hall) looks like; there is also a History link on that Venue page that has some historical photos.

I was Assistant then Manager at this theatre in 1956/7 I was invited by the Now Liverpool Lighthouse for a visit in 2005.I took a series of photos and have put a film up on Utube, if you search GAUMONT ANFIELD you can play it. I will always remember my time there

My Grandfather was the manager when the Gaumont opened in 1931. His name was Charles (Charlie) Brown and he stayed there until he left to manager the New Palladium on Lords St in Southport in 1935. Prior to opening the Gaumont he managed the Century Cinema from 1929. I have posted some photos of the Gaumont and the opening programme, as well as the promotional display for Trader Horn which opened the Cinema that week.