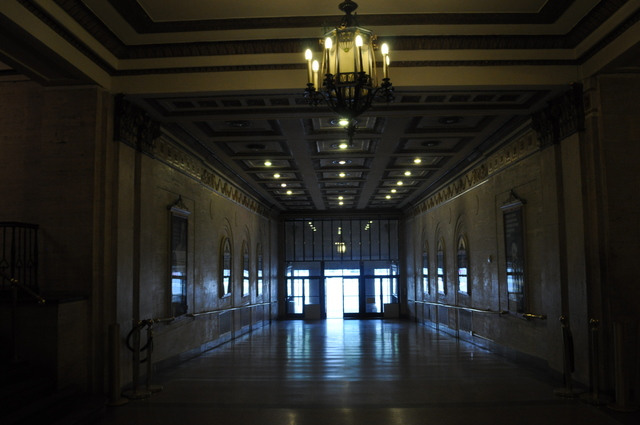 Built in 1925 for the Shriners as the Salaam Temple, it was inaugurated on September 8, 1925. The 2,800-seat main auditorium was decorated in Neo-Classical style, mixed with elements of Middle Eastern and Egyptian styles as well. The exterior of the Temple was an austere, soaring facade lined with six two-story tall Ionic columns.

Leased for use as a vaudeville and movie house early on by the Shriners, while they continued to meet in the large 1,000-seat ballroom area above the main auditorium, the Mosque Theater, as the Temple eventually became better known as, was easily one of Newark’s largest and most impressive-looking movie palaces.

The Mosque Theatre fell into somewhat of a slump during the 1960’s, after the the death of Mrs. Griffith, and for a while, the future of the Mosque Theatre looked questionable. In the mid-1970’s, a concerned group of Newarkers joined forces with the City of Newark to save the theatre from the fate of many of the city’s other movie palaces of the same era. Restoration work was begun slowly to bring the old venue back to its original appearance, as well as create more performance space out of other areas of the former Temple building (including another auditorium seating about 200 as well as a banquet hall/auditorium out of the former ballroom). The former Mosque Theatre’s main auditorium was rechristened the Sarah Vaughan Concert Hall, and the name of the entire complex officially renamed the Newark Symphony Hall.

In addition to symphony concerts, the Newark Symphony Hall today hosts pop concerts, live theater and dance, as well as many other events, and is one of the premier entertainment centers not just in Newark, but in the entire state.

I did lighting for the concerts at Symphony hall starting with The Beach Boys and Buffalo Springfield, Also did the Stone and all the other concerts there. I met the WHO opening for Herman’s Hermits and toured with them off and on for Forty Years. Any photo’s of cocnerts would be greatly appreciated.
R. Borders

It’s incredibly frustrating that Newark Symphony Hall’s own web site provides only one interior photo of the theater and not a very good one at that. If the theater is as beuatiful as they say it would make common sense to show it. Alas……

The old marquee on Symphony Hall should be restored. The current marquee is just hideous and emblematic of the surrounding area which also looks forlorn.

Hopefully they can raise the funds to fix up this grand old theater:
View link

Newark Symphony Hall has a long proud history of being the center of Northern New Jersey broadcasting.

Bremer Broadcasting based two of its broadcast properties in Symphony Hall, WATV Channel 13 a commercial broadcaster and WAAT-FM 94.7FM which broadcast jazz, classical and easy listening music, Bremer would later sell the stations to National Telefilm Associates who changed the TV station call-letters to WNTA-TV and WNTA-FM and when NTA split up its holdings Channel 13 became public broadcaster WNET owned by Educational Broadcasting Corporation who moved the station from Symphony Hall to new facilities on West 33rd Street in Midtown Manhattan in New York City while maintaining a small office and studio at Gateway Center across from Newark Penn Station in order to be in compliance with their FCC City of License requirement.

WNTA-FM was sold to a small religious broadcaster Family Stations Inc. who changed FM station’s call-letters to WFME and moved the studios, offices and transmitter from Symphony Hall to 289 Mount Pleasant Avenue in the suburban town of West Orange.

In 1965 a small little known independent english language television station WNJU-TV Channel 47 signed on the air from the space which was formerly occupied by WATV/WNTA/WNET and WATV-FM/WNTA-FM, In 1984 WNJU went spanish joining the NetSpan television network which would later change their name to Telemundo. WNJU moved from Symphony Hall in 1989 to Industrial Road in Teterboro and then 14 years later they moved again, this time to the former broadcast facilities of sister cable network CNBC (CNBC has since moved to Engelwood Cliffs).

According to current property tax records the City of Newark sold Symphony Hall to the County of Essex for just over $5 million dollars and it is now owned and operated by the Essex County Improvement Authority a semi-autonomous county agency which also owns and operates Essex County Airport in Caldwell/Fairfield. IMHO it looks like Joe D. and Essex County got quite a bargain for Symphony Hall.

Frank Bremer moved the studios of WAAT-AM 970 to The Mosque which he bought in 1944.

In 1947, he created WAAT-FM 94.7, building a transmitting facility atop First Mountain in West Orange.

In 1948, WATV-13 was New Jersey’s First Television Station. 1020 Broad Street became known as “Television Centre Newark.” Studios for AM-FM-and TV remained at The Mosque. FM and TV transmitted from West Orange. The AM towers were on Belleville Turnpike in Kearny.

In 1953, TV transmission moved to the Empire State Building. 94.7 FM is still on First Mountain as WNSH, a country music station. 970 AM, now WNYM, transmits from Hackensack.

Does anyone know when movies, or the last movie was shown here?