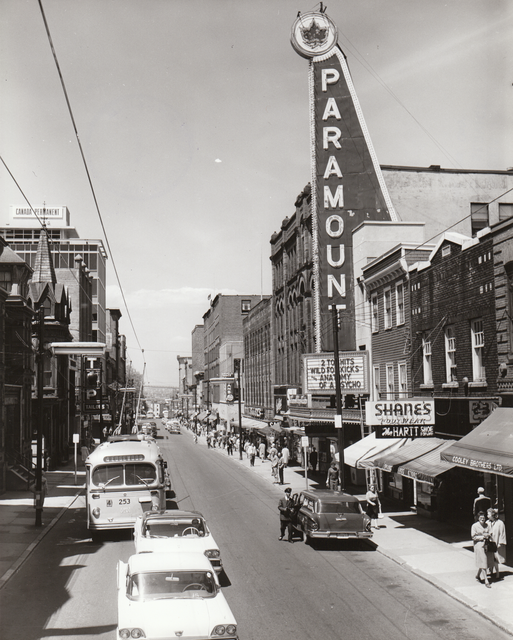 The Paramount Theatre opened on January 20, 1949. This long-closed former downtown Halifax movie house was demolished in 2001 to make way for a retail store.

This camcorder footage was taken in 1989, and at the 04:48 mark, drives by the Paramount Theatre, which had been closed the previous year. Although the front of the theatre is obscured by a bus, the marquee is clearly visible, with a “For Sale” message on it.

You can see the facade of the Paramount on the google street view, above. The canopy over the sidewalk still exists. I guess this must have been an entrance to the theatre, with the auditorium further back. It appears the auditorium had been demolished to make way for the Mountain Equipment Co-Op.

A few errors…The google satellite/hybrid and street view names the next street (to the right of the theatre) as Blowers. The correct name is Bowers (see the street sign). The satellite shot points to the wrong building as the Paramount. It is the third roof from Sackville St.

A couple of notes and corrections:

The Paramount Theatre closed on October 27, 1988, the same day as the Scotia Square Cinema, because of the opening of the Park Lane 8 Cinemas the next day. The last films shown were “Bat*21” and “The Kiss.” Also, when the theatre was twinned, the balcony was turned into the second auditorium.

Also, the street name is indeed “Blowers,” not “Bowers.”