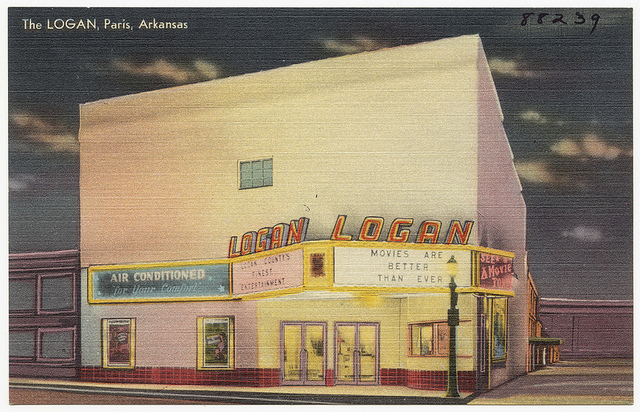 The Wiggins Theatre was opened prior to 1939. In the early-1940’s it was renamed Logan Theatre with seating listed at 705. The theatre was owned by K. Lee Williams Theaters Inc. circuit. It was heavily damaged by a fire on February 5, 1949. It was reopened in June 1950 with 600 seats on a stadium plan. The Logan Theatre was still open in January 1965. It was later renamed Paris Theatre and operated at least thru the 1980’s. The building was destroyed by a fire in 2005.

I lived in Paris as a child and remember going to movies at both the Strand and the Logan theaters. The Strand was open only part of the time, but when it operated, it was the one with the Saturday morning serials. It was located on the north side of East Main St in the first block off the square. I am less certain about the location of the Logan theater. I do not remember it being on the square. I recall it being on the east side of South Elm in the second or third block from the square. It had a vertical sign displaying LOGAN that was visible from a few blocks away. The Logan operated every day of the week with a new program every couple of days. In all honesty, I must state that my older sister believes that the Logan was on the square. I hold to my belief and recall that enroute to the Logan, I had been cautioned to steer clear of the Green Frog cafe which was also south of the square. When we left Paris in 1946, I was eight and my sister was eleven.