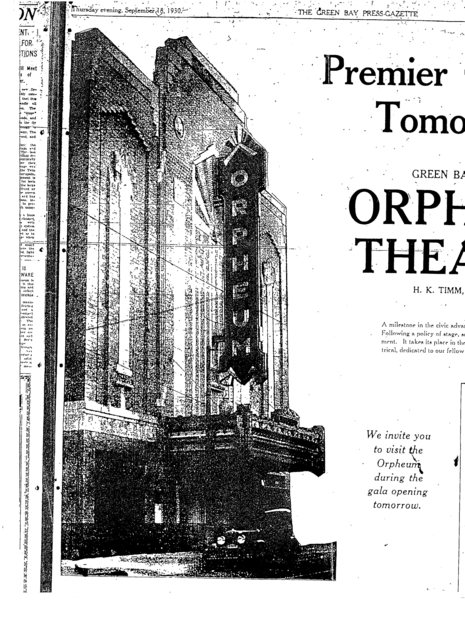 Opened as the Green Bay Theatre in late-February 1900. Seating was listed at 1,114. It became the Orpheum Theatre on September 30, 1912 and was operated by Fox Wisconsin Theatres from 1933 and renamed Fox Theatre from August 25, 1933. On December 25, 1957 it was renamed Vic Theatre and was operated by Marcus Theatres. The theatre was located a couple blocks from the West Theatre on E. Walnut Street.

The theatre closed in the late-1980’s. The building is still standing and became a banquet Hall named Confetti’s and is very recognizable as a former theatre. By 2017 it was a bar.

The main branch of the Green Bay Public library has a couple of folders of news clippings about the theater. Some dating to when the theater opened in 1900. The clippings are a good read. It read like no expense was spared when the theater was renovated in the 1930s. It would be real nice to see some interior pictures of the theater if anyone has them. The library has a couple of photos of the exterior and interior, but they are of poor quality. It would be nice to have a downtown movie house in Green Bay.

This truly is “Green Bay’s First Theater” as it was the first structure built exclusively as a theater. Construction began in late-summer, 1899 and the theater opened with “Because She Loved Him So” in late-February, 1900. In 1912, the Marx Brothers appeared on stage at the Orpheum in “Mr. Green’s Reception.” Interior photos of the theater are most-desirable. What type of movies would one want to see at a downtown movie house in Green Bay?

Curtis, Thank you for the links. There were some photos that I have not seen before.

How many Green Bay natives are out there? Please chime in.

Just posted some articles and a picture of the outside of the theater after its 1930’s remodel. The September 18, 1930 issue of the Green Bay Press-Gazette has a very large write up about the theater.

“HIS DREAM COMES TRUE” Harry K. Timm manager of the Orpheum theater, brings to his post an excellent background of experience in the legitimate drama, vaudeville and motion picture fields, and is regarded by the stage folk as one of the most capable managers in the middle west. Frequently in the past visiting players have remarked “It’s good to be back in a regular show-house”. Mr Timm has been manager of the Orpheum in Green Bay for 14 years. Prior to that he was with the Finn & Heiman theater circuit, later absorbed by the Orpheum circuit. Before that he was with the W. S. Butterfield chain of theaters in Michigan. Altogether, he has been in the show business for 18 years, and is thoroughly conversant with all its branches.

FIRST PROGRAM WILL BE GIVEN AT 1 O’CLOCK Organ Recital, Comedy and Four ‘Vodvil’ Acts Scheduled. Simple but impressive services all within the theater will mark the reopening of the Orpheum Friday afternoon and evening after being closed since the winter of 1929, according to Manager Harry K Timm. There will be four performances the opening day, one at 1 o’clock, one at 3:30, one at 7, and one at 9:30. The doors will open at 12:30 noon, and at 6:30 in the evening to permit the crowds to inspect the interior of the theater f before the performance starts. There will also be an intermission between the first and second shows, afternoon and night.

The Vic is under new management and will reopen again as the Confetti Club. Opening night is April 21st.

I noticed it on a little scrolling marque in the window of the theater. It looks like it never reopened.

Its now a bar that my dad helps manage ive been in there and let me say this its creepy as f**k lights turn on by themselfs ive personally had something screem my name!