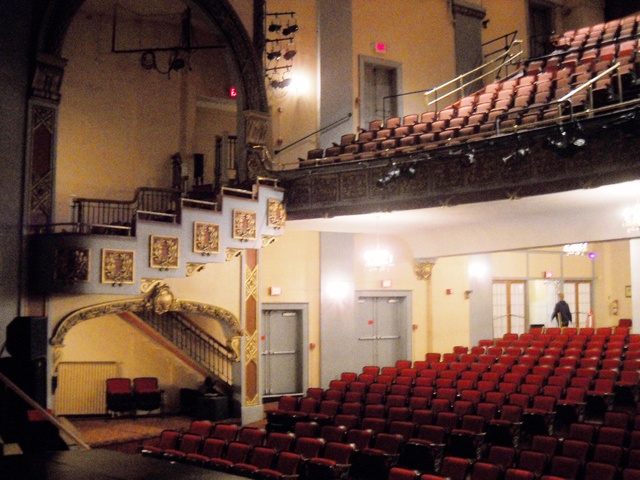 When the Palace Theatre opened on April 9, 1915, it was billed as one of the grandest theaters Manchester had ever seen. It was designed by architect Leon Lempert, Jr. It could boast that it was the first theater in the state that was both fireproof and air-conditioned (fans blew over huge blocks of ice under the stage).

The Palace Theatre opened with a live musical, "The Modern Eve", and in addition to live theater, vaudeville acts played its stage from 1915 until about 1930. Among those to play the Palace Theatre in Manchester included Bob Hope, Jimmy Durante, Red Skelton and the Marx Brothers.

In the late-1960’s, it was closed, and taken over by New Hampshire College for additional classroom space.

After the college moved out, the auditorium seats were taken out, and the Palace Theatre was used as a warehouse for a couple years, falling into serious disrepair.

In 1974, Manchester’s mayor Sylvio S. Dupuis and lawyer John MacLane began a campaign to return the former theatre to life, and with financial assistance, the theatre was restored to its original glory, including new orchestra seating. The Palace Theatre was reopened later in 1974, as a performing arts center, with nearly as much fanfare as almost sixty years earlier when it first opened its doors.

In 1980, a burst pipe sent over 70,000 gallons of water cascading from the balcony down to the main floor, causing some damage, but quickly repaired. Four years later, a disastrous fire caused heavy damage to many of the Palace’s neighbors on Hanover Street, but thanks to its fireproof building material, the theater and its immediate neighbors were unscathed by the blaze.

Would love to see this theatre in person as it has been described as showing similar interior to the unrestored Carolina Theatre in Charlotte NC.

After reading this theatre’s life history it is truly amazing that it still with us today. Many theatres with less history don’t make it, but this one survived through many changes.

Duh….it’s “GhostHUNTERS” on SciFi. “Ghostbusters” is a movie. Double duh!

From the early 1900s a postcard view of the Palace Theatre in Manchester.

Posted some photos from 5/2011. Camera date wrong. Staff let me in around noon took a few pics.

The Theatre Historical Society archive has the MGM Theatre Report for the Palace; it’s Card # 498. Address is Hanover St. There is an exterior photo dated May 1941. Condition is Fair. The report says it was over 15 years old, and showing MGM movies. There were 612 seats on the main floor and 394 in the balcony, total 1,006. On the marquee is posted “Every Friday – Saturday Big Stage and Screen Shows”.