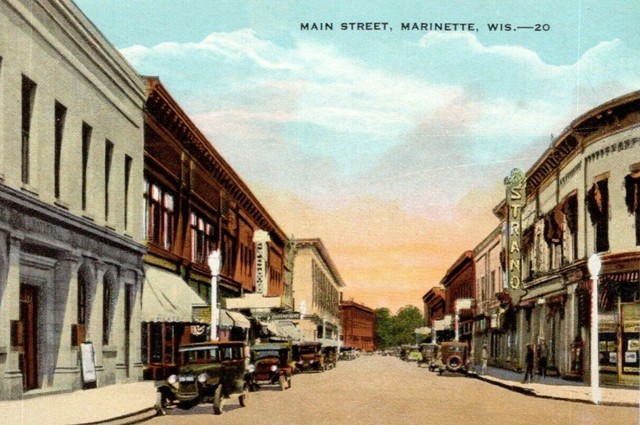 The Ascher’s Theatre was opened by the Ascher Brothers Inc. in 1916. It was renamed Strand Theatre opening on September 22, 1917 with seating listed at 730. The theatre was located just down the street from the Bijou Theatre.

This was one of three theatres operated in downtown Marinette by Fox Wisconsin Theatres.

The Strand Theatre closed in the mid-1950’s and the building is now occupied by Quick Signs.

The Moving Picture World ran two items about theaters under construction in Marinette in 1916. The June 17, 1916 issue of MPW said that the new theater being built at Main Street and Pierce Avenue in Marinette would have 700 seats, and gave the size as 60x120. The Strand was on Main Street at the north end of Pierce Avenue, so this project was in the right location and about the right size for the Strand.

The other notice, appearing in the June 10 issue, gave the location only as Main Street, gave the dimensions of the building as 90x120, but again gave a seating capacity of 700. It also said that the new house had been leased to Ascher Bros. It’s possible that there was only one construction project and the magazine garbled the details from one item to the other, but either way the location of Main and Pierce in the June 17 item suggests that the Strand might have been built in 1916.

This November 16, 1916 issue of MPW says that the “Ascher’s” had opened in “Menomonie”(sp) seating 700 - perhaps only briefly under the Ascher ownership and then quickly changing to Strand the next year. https://archive.org/details/movingpicturewor30newy/page/1048/mode/1up?view=theater

Yes, it was originally known as Ascher’s. It along with the Bijou and Marinette were sold to Fitzpatrick & McElroy and it was renamed to Strand. https://archive.org/details/movingpicturewor32newy/page/663/mode/1up?view=theater