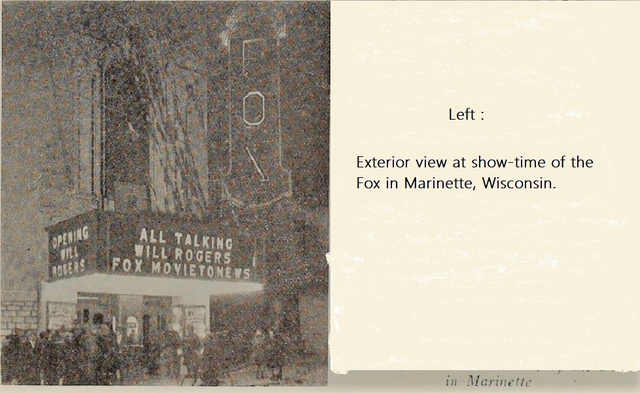 The Turner Opera House was opened on October 8, 1891. It was renamed Marinette Theatre in 1912 and became a movie theatre. In 1914 it was operated by the Ascher Brothers Inc. On November 23, 1929 it was renamed Fox Theatre with seating listed at 700. The theatre was about a block and a half from the smaller Bijou Theatre. This was one of three theatres in downtown Marinette operated by Fox Theatres.

The Fox Theatre was owned by Fox Wisconsin Theatres thru 1950 when it then became part of the Thomas Theatres. The theatre was still open in September 1966, but had closed by 1967 when it was reported the roof had partly caved in and the building was demolished.

Typo in the heading: Should be Vine Street, not Vince Street.

A headline in the Marinette Star November 22, 1929 reads “Fox Theater Opens Tomorrow At 6 PM–Built In Spanish Renaissance Style–Replica Of Place” (the paper itself is not available online, only the headlines.)

The rebuilding as the Fox must have been extensive. The one photo we have of the Fox shows the entrance on the corner of the building, while historic photos of the Opera House show the entrance in the center of the building on the Stephenson Street side. The Turner/Scott/Marinette had been listed in Theatrical guides as an upstairs theater, but the Fox was a ground floor house. Unfortunately the Eagle headlines are silent on the subject of the conversion to a ground floor theater, so I don’t know if it was done by Fox or at some point when the house was under the Ascher Bros. control.

In any case, the Fox endured for almost four more decades. The November 13, 1959 edition of the Eagle included an illustrated supplement commemorating the Fox’s thirtieth anniversary. The theater was still operating in September, 1966, when the paper sponsored an event there, but the end came in 1967, when the headline in the September 6 issue of the Eagle read “Fox Theater Whose Roof Partly Caved In, June, Is Razed.”