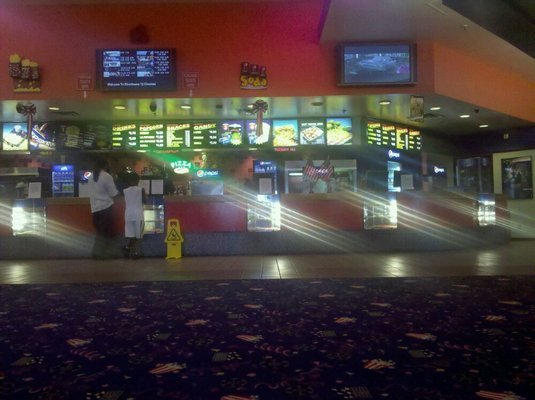 The Rivertowne 12 opened in the late-1980’s by AMC, who closed it in 2006. Chicago-based Spotlight Amusements renovated the theater and reopened it summer of 2011. The theater is located in the Rivertowne Commons Market Place. It was closed in 2013. AMC reopened the theatre April 30, 2015.

Reopening is now set for April 1 after the renovations by Spotlight Amusements of Chicago; the theater will now be known as the Rivertowne Cinemas 12. The story is here: View link.

Official website has no showtimes as of anywhere online. It must had closed in 2013.

I was in the area on Fri and there is, indeed, a CLOSED notation on the marquee. On the other hand, the website indicates upcoming films not released, such as Anchorman 2 and other December releases.

With the recent opening of an outlet mall just nearby and probably a casino, its too bad this place couldn’t hold on. With the increased traffic from those businesses, the area could use a movie theater, but I would think a more modern facility within the casino/outlet mall confines would do better much better.

It doesn’t surprise me that this theatre ended up closing after being reopened. It was kind of doomed from the start for several reasons.

The new operators were the same of Eastpoint 10 in Baltimore which is still open. They were previously affiliated with Village Theatres out of Chicago. All of those locations ended up closing after promises of renovations and stadium seating conversions which never happened. When AMC closed the location it was possibly going to be taken by Best Buy so AMC ended up gutting it and removing all the equipment, seats, screens, masking and rigging, etc. When the new owners came in they had to replace everything. They decided to replace everything with used equipment (used older style seats, screens, etc.) in addition to used 35mm projection equipment.
There was an issue with Paramount pictures including a lawsuit because one of the people affiliated with the theatre was being sued by Paramount for issues with reporting grosses. They settled and still didn’t get product because Paramount accused them of underreporting grosses at Eastpoint 10. Neither location got Paramount movies. The Marlow Heights theatre up the road was renovated and taken over by the landlord to be managed by Phoenix Big Cinemas. They put in all new seats, digital projection, etc. and fully renovated the theatre with new items unlike Rivertowne who put in all older used items. The location had a poor reputation previously and the only way it could have been successful was probably if someone went in and put in new items (at the very least some updated seating and digital projection). The “fly by night” company that took the space probably wasn’t capable of doing that. The neighborhood is rough and probably wouldn’t be able to attract a national chain to return to the sight. Also Hoffman is so close and that probably stops someone from going into National Harbor with a new theatre.
AMC is going into a lot of older sites now and renovating them with recliner seating (like what they did at St. Charles, Courthouse, and Worldgate). If they aren’t interested in doing that with a location then it’s probably doubtful that someone else would want to either. The theatre is set back from the curb and parking lot with shops surrounding it. It makes it difficult for someone like Best Buy to go in to the space. I don’t know if someone will try again with a theatre but if they do they have an uphill battle. If someone can put in all digital projection and upgrade seating to high back seats (even without stadium seating) they might have a shot. The best course of action for the shopping center might be to open it themselves and find someone capable of a management deal such as what the shopping center at Marlow Heights did. I suspect that the theatre does end up helping the other shops around it but it’s doubtful that it would be profitable for a new operator to go in. Academy 8 (a former AMC as well) was renovated and is under a management deal and seems to be doing okay. *The shopping center was recently sold by the Peterson Group to another landlord so possibly they will look at trying to do something with the space.

So this theater will open back up on April 30th 2015. It will once again be owned by AMC and will be fully renovated and have reclining seats. They will show 3D movies but will not have IMAX screens.

they should have rejigged one of the auditoriums for ETX or Dolby Cinema.

AMC taking the reins again on this mplex is strange. With the Hoffman just over the bridge, it doesn’t make sense. With the new casino and traffic, a close movie theater would be nice but a newly constructed one would be better. You still got the riff raff to deal with in the neighborhood. The buffet place that is next to the theater draws in crowds, so going to see a movie next door after dinner or lunch would make sense.

If memory serves me correctly, there aren’t ‘large’ auditoriums like the old Academy 8 when this place opened back in ‘86 or so. The Academy 8 had 4 larger halls; 2 had 70mm and then 4 tiny auditoriums with steeply raked seating. Not sure what the owners did post-AMC with remodels here.

It fits AMC’s business model – they’ve been taking over one-offs, locations that in the 90s they would have closed “just because”. The new idea is if they’re in a good retail site, why not? Gerry Lopez, I suppose is applying the Starbucks model here. The strangest take over is the Oakbrook 4 — closed by 14 years ago by Loews Cineplex, reopened last year as an AMC recliner-plex with McGuffins.

Oakbrook makes sense because they are also building a new theatre at that location. Rivertowne doesn’t make sense because it’s in a horrible neighborhood and they closed it many years ago because of all of the security issues and because it was losing a significant amount of money. Those security issues still exist in that neighborhood. It seems in many cases they are now doing this simply to increase screen count.