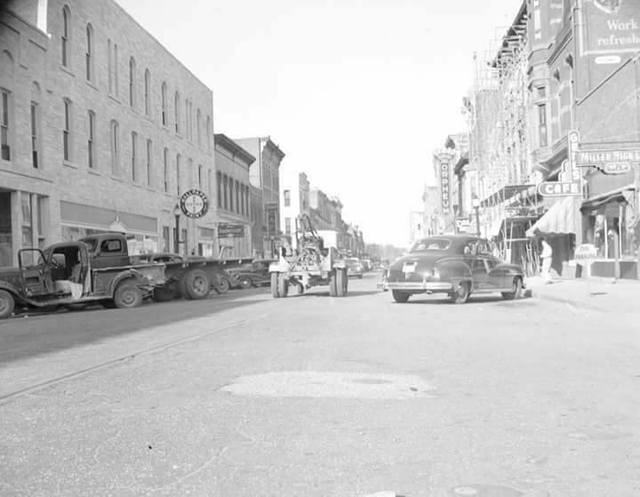 The Orpheum Theatre at Leavenworth was opened March 4, 1907. It suffered a gas explosion and fire in January, 1909, with the loss estimated at $35,000. The theater was either repaired or rebuilt, and in the early-1920’s it was being operated by C.F. Mensing. Sometime around 1917, a two-manual Moller organ was installed. The Orpheum Theatre was closed around 1952 and was demolished in 1954.

I am distantly related to C.F. Mensing. Through my research I found that he moved to Florida in the mid- to late-1920s. I always wondered if he held interest in any of the businesses he had in Leavenworth. He died in Miami, Florida in early 1959.

kath2000: What little I know of C.F. Mensing I obtained from a few online sources. A brief biography in a history of Leavenworth County, published in 1921 was the primary source. An item in a 1924 issue of The Reel Journal named him as still being the operator of the Orpheum and Lyceum at that time. He was mentioned under the name Carl Mensing in a 1926 issue of the same publication. I also came across a patent for a golf club, filed August 1, 1927, by Carl F. Mensing of Leavenworth, Kansas, and granted March 13, 1928, so he must have still been in Kansas in late 1927. I’ve found no later references to him.

The Orpheum Theatre in Leavenworth is included on this list of known Boller Brothers theaters as a 1909 project. It has been demolished. A history of Leavenworth published in 1921 said that the seating capacity of the Orpheum at that time was 1000.

A 2/8, manual/rank, keyboards/sets of pipes, Moller Theater Pipe Organ, Opus 2578 was installed in the theater in 1919. It came from the Moller Pipe Organ Company in Hagerstown, Maryland and cost $4,350.00. Does anyone know what happened to the organ?

The original Orpheum Theater opened at 326/8 Delaware on March 4, 1907 and time for the ill-fated New Orpheum to commence operation in downtown Leavenworth. George V. Hankins bought two buildings and fused the existing buildings to squeeze out the Orpheum with its 30' deep stage for vaudeville. 1,000 people could sit downstairs and 300 African Americans could sit in the balcony. It was supposedly the stop between Kansas City and Topeka’s Orpheum. Lee Cohn was the initial manager. But his euphoria would be fairly short-lived, however, as the Orpheum changed hands by month’s end with Orpheum Amusement Company, itself, interceding. The jinxed theater would suffer a major fire in an apparent gas leak that decimated the building on January 17, 1909. Doors blown out, attraction sign barely hanging with ropes, the Orpheum Amusement both sued for insurance funds and decided to sell its Leavenworth location in a dispersal sale.

M.B. Shanberg was the new operator and converted the eyesore into a long-running house. He would rely on the Sullivan-Considinc circuit for vaudeville and – recognizing the history of the town – had a 27x24' theater curtain depicting Fort Leavenworth in 1865. The theater opened on February 20, 1910. On July 15, 1912, Carl F. Mensing of the Casino Theatre took on the Orpheum. A neat freak, Mensing had a crew of “White Wings” who ensured cleanliness of the theater and, to clean trash from the Leavenworth streets, offered free admission to any child bringing in 25 discarded cans.

Mensing’s switch to motion pictures in February 1913 drew big crowds and he would change the name of his People’s Theatre to the Lyceum to have multiple motion picture theaters. With people coming for the motion pictures, Mensing hired Gerald Baker at the Orpheum to play the newly-installed Moller organ in January of 1919 to enhance presentations. And the Orpheum made headlines on Feb. 24, 1924 by packing audiences for — reportedly — the first Kansas showing of “Birth of a Nation.” Censors had banned the film from playing in Kansas back in 1915 and the Orpheum did it up right with a special orchestra playing the original score.

In 1930, the Dubinsky Brothers would take over Mensing’s theater holdings including the Orpheum and Lyceum likely on a ten-year leasing arrangement. The Dubinsky’s got on the wrong side of the Kansas State Attorney by having “Bank Nights” popular in many theaters across the U.S. Kansas had barred all bank nights and sent the Dubinsky Brothers a cease and desist ending the policy in February of 1937.