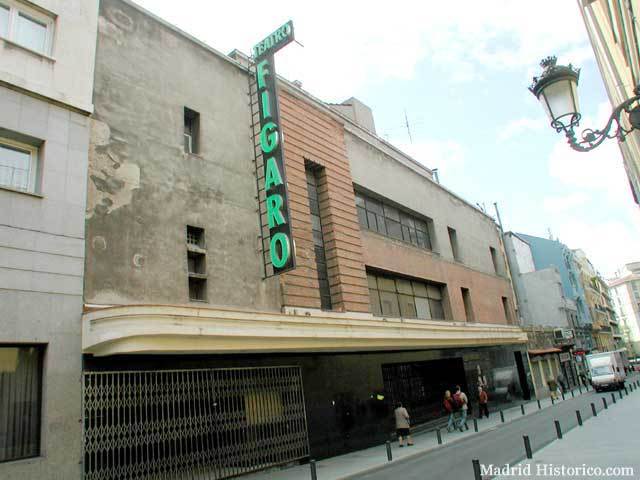 Located in the centre of Madrid. The Teatro-Cine Moderno was opened on 11th November 1931. Seating was provided for 950 in orchestra and balcony levels.

Later re-named Cine Figaro and it was remodeled in 1962, losing some of its original interior design. It continued as a cinema until 1969.

In recent years it has been in use as a live theatre, with a reduced seating capacity for 616, with 436 in the orchestra and 180 in the balcony. Renovations were carried out in 2004 and 2009.

My Spanish is rather limited, but I believe that this webpage, with pictures, indicates that the theater opened in 1931 as the Cine Moderne and is located on the Calle Dr. Cortez: View link

Opened November 11, 1931, according to this web page (also in Spanish) which features a small color photo of a mural in the “vestibulo” (which I believe means lobby.) This was one of two murals painted for the theater by artist Alfonso Ponce de Leon. The other has been moved to a museum.

The article contains this sentence: “De la arquitectura original interior apenas queda nada.” I’m afraid the final three-word phrase means “almost nothing remains.” One line makes reference to a “…great beam and iron straps that hold up the walls” (Google translation.) It also notes that the seating capcity has been reduced to 500.

From my rusty Spanish and a couple of really awful computer translations, it appears that the theater hosted a few stage productions in the 1930s, then presented only movies until 1969, but today it is used for live theater. The article also says that the stage and dressing rooms are currently being renovated.

The theater can be found at Google Maps with the address: Calle del Doctor Cortezo 5, 28012 Madrid, Spain.