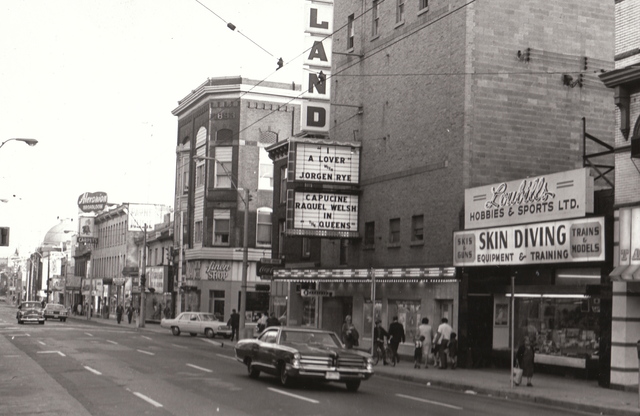 Originally opened as the Roxy Theatre (date unknown). It reopened as the Hyland Theatre on November 11, 1955 with John Mills in “Above Us the Waves”. It was closed September 25, 1986 with “Dead End Drive-In”.

It reopened as the Hyland Cinema on December 26, 1986. It was operated by the owners of the Broadway Cinema. It had a great sound system with THX certification. The Hyland Theatre was closed October 6, 1987 with “A Man in Love” and “La Bamba”.

Sad commentary on downtown Hamilton. In other cities old theatres are either redevolped or turned in to book stores, fitness clubs, music clubs or restaurants. In Hamilton they are just boarded up and sit there for years. Too bad, they were once nice, vibrant theatres, showing the finest in entertainment…and now there they sit.

That is the problem with downtown hamilton. In the seventies, downtown Hamilton was alive with theatres and one by one they closed with most of the being demolished into parking lots. The downtown is filled with boarded up building including Hamilton’s well known Lister Block. There is no reason to go downtown if you live up on the mountain. Also, it is not the safest place either.

I was at this pawn shop yesturday trying to aquire some information on the theater. The guy I talked to was a young guy, he said that the theater was before his time. But, at the current time the theater is a pawn shop on the main floor but the upstairs is just storage for the pawn shop. The guy said that there is still a balcony, but due to it being a jewlery store as well, there are certain security measures that are causing them to not be able to tell me more about this theater.

Mike. Is the lobby of the Hyland the pawn shop with the auditorium and balcony seating area closed off to the public? From what I can remember, the upstairs leading the the balcony had its own lobby area with washrooms and refreshment stands. This is probably the storage area the young gentlemen was talking about. Mark.

I worked as an assistant manager at the Odeon-Hyland in Hamilton, Ontario from October 1974 to about July of 1975, after I was transferred in from Odeon Kitchener and before that, Odeon London.

At the time, Odeon Theatres (Canada) Ltd. transferred their assistant managers and manager trainees around the province so they could learn from different theatre managers.

When I worked at the Odeon-Hyland Theatre in 1974 and 1975, the longtime manager was a gentleman by the name of Gordon Gotts who lived in Stoneybrook. He was an ardent Hamilton Tiger-Cats' fan. Nice man.

When I first arrived at the Odeon-Hyland in October of 1974, the theatre was showing soft-porn movies, starting at 12 noon and running until about 11:30 pm.

That all changed in early 1975 or so when we premiered the blockbuster movie, Earthquake (with “Sensuround”), which subequently broke all house records and ran for about 20 weeks.

I remember the “Sensuround” cracked the retail store’s front plate-glass window next door (attached to the theatre). The entire theatre vibrated when this earthquake-replicating sound came on. It was produced by about 12 large speakers placed on the main floor of the theatre and the balcony.

See a vintage photo of the Hyland as part of John Sebert’s “Glamorous Ghosts” at: www.hamiltonmagazine.com/sitepages/?aid.
The building still looks the same as the Google street view above. The same business is still there. There is a window display, in the building to the right, offering vintage 1940’s theater seats from the Roxy/Hyland (for $100.). The street-level facade is the original Roxy design. The terrazzo in the entrance has the letter “R” for Roxy. The vent below the display windows has a metal grill that has an “R” (for you-know-what), as well. The tiles on the facade are off-white, with a burgandy ‘veining’. This same tiling was on the State/Towne and the Playhouse. It has been removed from the latter two theaters, within the last year or so. I believe the Towne had grey ‘veining’ (is this a woid?) instead of burgandy.

When I a kid, I remember my brother and I saw “Munster, Go Home” and “Out of Sight” on a double. Kids everywhere and a lot of them sitting in the aisles. This theatre originally showed B-movies. When Odeon took over management, they showed lesser Universal films, usually on double bills. After, they showed second-run doubles of movies that had just played at the big houses (good stuff). Later, there were first-run movies like “Conan the Barbarian” and the two features in ‘Sensuround’, “Earthquake” and “Rollercoaster”. It was not a very good theater. The auditorium was not very deep (look at the side of the building on Google) and the projection room was very high. Because of the high angle, the image was distorted (the sides of the picture were angled and masked). An actor or object at either edge of the picture, were on an angle, but straightened out as they got closer to the center of the screen. I think I’ve read elsewhere, that this is called ‘keystoning’. The screen was high on the wall, so if you sat on the floor, in the rear rows, you saw the bottom edge of the balcony at the top of the screen.

I worked at the Hyland from 1973 to about 1976. I was only 16 and told not to watch the movies (because they were restricted! ) Used to sit next to the popcorn machine munching on popcorn. The assistant manager made me walk up and down the aisles with pop and popcorn (like at a ball game)… very embarassing.

Gord Gotts was a really nice man. He used to be manager at the Palace theatre and had hoped he would get the Odeon theatre, but unfortunatley he and his staff were moved over to the Hyland while the manager of the Capital got the Odeon.

Whole pounds of real butter were melted in the butter machine for the popcorn.. none of this synthetic crap now.

Earthquake was amazing… humongous speakers placed all around. When they went off you couldn’t hear a thing, including the phone or someone standing 2 feet in front of you.

The projection booth was high – see the windows up high in the photo at http://americanclassicimages.com/Default.aspx?tabid=123&CategoryID=3281&Category2ID=3224&List=1&SortField=ProductName%2cProductName&Level=2&ProductID=36724 The dressing room and storage was way up there too… creepy.

Nice memories of my first job where I started working with Mrs. Tipper and Mrs. Edge and Jane.