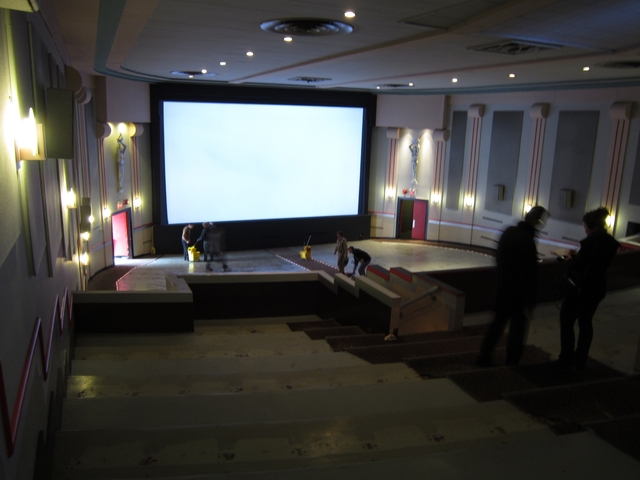 The Oxford Theatre was opened March 1, 1937. This is the last single screen theater in Halifax and one of the last in Nova Scotia. It originally had seating provided for 720. It has great seating with a balcony and more leg room than even the longest legs would require and the seating capacity has been reduced to 340.

It serves as the art house theater for the city, and shows midnight movies as fundraisers for non-profit groups. It closed September 13, 2017 to be converted into commercial & residential use.

The Oxford Theatre opened on March 1, 1937. At the time, it was one of the smallest theatres in Halifax, intended as a local neighbourhood cinema rather than a luxurious movie palace. However, as the years have gone by, and the numerous other larger (and more majestic) single-screen movie theatres were closed, the Oxford was left standing as one of the only single-screen movie theatres in Atlantic Canada.

Even in the 1937 Halifax Herald article about the opening, the interior design was described, to paraphrase, as having a kind of severe minimalism to it. Compared to the Capitol and Paramount theatres downtown, this was likely true. Indeed, apart from the two Art Deco statues flanking the screen, the design of the theatre is rather basic, but certainly more pleasing to the eye than your average multiplex auditorium.

The Oxford hasn’t seated 680 people as long as I’ve been coming. Until yesterday, the theatre had 414 seats, and lots of legroom.

The exterior and roof underwent major renovations in mid-2011. The exterior was also repainted in Empire Theatres' corporate colours.

And yesterday, March 4th, just a few days after the Oxford’s 75th anniversary, it projected 35mm film for the last time. The last film print shown was “Monsieur Lazhar”, Canada’s foreign language Oscar nominee. The theatre is closed until Friday, and a Barco DP2K-12C digital projector was installed today. The 35mm projector was removed and placed “in storage.” The theatre is also getting brand new seats as well, which should reduce the seating capacity further to somewhere around 368. I was at the theatre, and was able to take a few pictures of the renovations, which I am uploading here shortly.

Empire Theatres is to be commended for keeping the Oxford running, and putting major money into it when they could easily close it and direct everyone to their numerous other multiplexes around the area. It does quite reasonable business as an arthouse, and even occasionally shows the latest blockbuster when there’s a drought of indie and foreign films.

Here’s to another 75 years of the Oxford!

Oxford was purchased from Odeon in July of 84, I was working there at the time. When it was first renovated in 88, the seat count went from 680 of the blue seats, to 446 of the Canada Chair Red fireproof seats. Then to 444 when I removed 2 for wheelchairs about 10 years later. Peter Cotton was the designer, I still have some of the original design sketches. I also have the original bathroom signs from before the renovations in 88

Theatre to close September 13; building sold, new owners will convert it to a commercial and residential complex. CBC story here.

September 13 has come and gone and the Oxford is now closed, as it is no longer listed in Cineplex’s listings, so the status should be set to Closed.