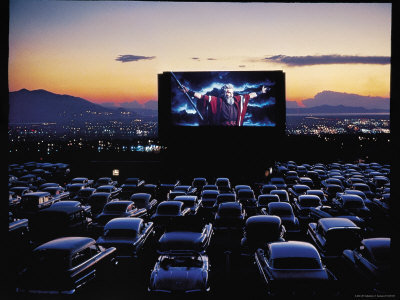 The Oak Hills Drive-In opened on July 21, 1951 with Tyrone Power in “American Guerrilla in the Philippines”. It had a car capacity listed at 400. The drive-in was located just southeast of the Hogle Zoo.

One feature of the drive-in was that residents just south of the drive-in could pay $50.00 for an installation fee for a speaker set up in their home and view the movies from their home. The theatre was owned by Fox Intermountain Theatres.

The Motor-Vu was built by and owned by my wife’s grandparents. This Life Magazine photo (part of the life in America photo series) was taken at the Motor-Vu. Her grandparents saved the photographer’s letter thanking them for their gracious welcome and for helping him with his photo. They saved the letter along with the photo. We have that letter and photo along with Redbook magazine photos taken in their home that was underneath the screen tower, various telegrams, and other memorabilia. This photo was definitely taken at the Motor-Vu.

Very interesting. I have two photography books, one published by Life Magazine, that label the photo as Oak Hills, Utah, as if Oak Hills was a city, and the year 1958. If you look to the west, you will see the Kennecott smokestacks more to the south which would be the right angle if you were at the Oak Hills Drive. The advertisement confirms that the movie was playing at the Oak Hills when Life says the photo was taken. I do remember seeing the Ten Commandments at the Motor Vu and I’m almost sure it was in 1956. My father was bored to death. I’m not sure any of this matters. I spent a lot of very good hours at both theaters.

The link to the LIFE Facebook page and their description of the photo. It appears that they are giving out confliction information.

While in Jr. high school, a friend had one of those speakers at his home. We would sit on his balcony and watch movies. It was a novel experience, but the features didn’t change often enough even in those days for middle school kids. The last movie I saw at the Oak Hills was “The Carpetbaggers”. Correction to the earlier post: conflicting not confliction.

Google Books has that issue of Life, Dec. 22 1958, available for viewing. https://books.google.com/books?id=Yj8EAAAAMBAJ&lpg=PA4&dq=Eyerman&pg=PA17#v=onepage&q=Eyerman&f=true

The caption reads “At Oak Hills near Salt Lake City, as jets etch the evening sky, Moses in The Ten Commandments casts his biblical wrath down at the parked cars.” Yes, jets. As originally printed in that two page spread, jet trails were clearly visible above the left mountain peaks.

Trick question: What movie was playing when the photo was taken? As I guessed in 2013, it was not The Ten Commandments. Think about it – it’s barely dark enough to see a movie, but we’re already at the Red Sea scene?

In a sidebar from the Salt Lake Tribune, it revealed that the photographer “lured dozens of local college students to the showing of the 1956 film ‘… And God Created Woman’ featuring Brigitte Bardot, said his daughter Kathryn Marshall.” Then he swapped in that Heston frame.

So if you want to prove where it was taken, find the newspaper ad for that movie, not The Ten Commandments.

A more accurate address for this theater is now 980 Oak Hills Way, Salt Lake City, UT 84108. This points directly to the entrance road. Both Alton and Crestview did not exist when this drive in was open. In everything south of this address with the exception of the theater were empty fields at the time.

The story checks out. As I wrote here a few years ago, in a sidebar for a Salt Lake Tribune story (here’s a rot-proof Internet Archive link to it), photographer J.R. Eyerman’s daughter Kathryn Marshall said that her dad used “… And God Created Woman” to lure a full house for the photo.

Sure enough, in mid-August 1958, the Oak Hills showed that Bardot movie (“NOT Recommended for Children!”) and didn’t get around to “The Ten Commandments” until a few weeks later. So now we know where and when that iconic photo was taken.

The cars in the above photo, look like they parked very close together!!

Opened on 21/7/1951 with 2 cartoons, “Puny express(Woody Woodpecker), and Cat and the mermouse(Tom and Jerry), and "American guerrilla in the Philippines”.

Boxoffice, Sept. 10, 1955: “Fox Wasatch Corp., a subsidiary of National Theatres, Inc., took over operation of Joseph L. Lawrence theatres this week. National purchased the showhouses in Utah from Lawrence after receiving permission from the federal court in New York to do so. Theatres involved are the Uptown, Villa, Rialto, Southeast, Murray and Oak Hills Drive-In in Salt Lake and the Academy in Provo.”