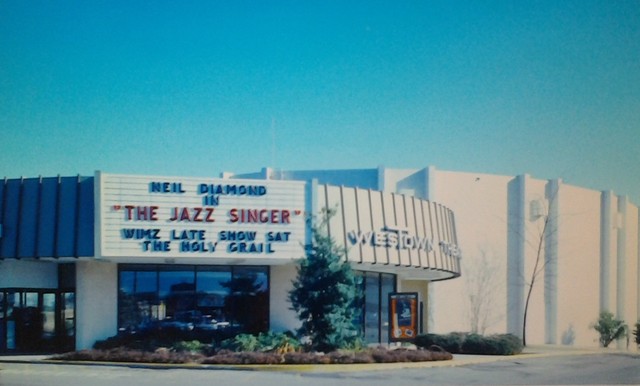 This theatre was located in the north-east corner of the parking lot of West Towne Mall, near the corner of Kingston Pike and Morrell Road. It was a circular building in the style of a Cinerama house. The lobby had huge plate glass windows looking out, and a central semi-circular concession stand.

West Towne Mall opened in 1972, and the Westown Ultra-Vision Theatre opened December 20, 1972 as a single screen cinema with Steve McQueen in “The Getaway”. it was operated by ABC Theatres. It was twinned in October 1983.

I recall seeing "The Empire Strikes Back," "Hellraiser," "Heathers" and "Fanny and Alexander" here. When West Towne Mall underwent major renovations in the late-1980’s or early-1990’s, the cinema was closed June 28, 1990 and was demolished in favor of a new in-mall multiplex.

thanks again for the updates.

For those keeping track of former Ultra-Vision venues, there were also two in South Florida: The Ultra-Vision Twin in Deerfield Beach (now demolished after 25 years as a church)

and the Dolphin in Palm Springs (near West Palm Beach)

The photo of the Westown is very similar to a Deerfield Ultra-Vision auditorium.

When Westown opened, it replaced the historic Tennessee Theatre downtown as the flagship theatre for ABC Southeastern Theatres in Knoxville. When Bill Courey, the city manager, was asked what the future for the Tennessee was, his response was; “We will continue to operate it, but it is hard to keep a large theatre that is located in the downtown area, and my guess is we will have to close it. After that, I am afraid it will become a parking lot.” Today the Tennessee is alive and enjoying the best years of its life, and the theatre that was built to replace it is now the parking lot.

An aerial photo of the theatre can be found here: link It is the oval building in the lower left hand corner of the mall parking lot.

I worked at this theater in the late eighties during college, it was a fun time. I was there when someone drove a car into a crowd of Last Temptation of Christ protesters and was surprised it barely made the news.

Am I the only one who remembers that this theater burned rather than be demolished? I recall fairly clearly that a few months after the Last Temptation of Christ showed at this theater that it burned (so no later than early 1989) and many people in Knoxville thought there was some connection between the two things. My memory is also that the fire was officially blamed on bad wiring or a faulty plug on one of the popcorn machines. It was torn down and never rebuilt. The new theater inside the mall didn’t come along until the original Westown Theater had been gone for quite a while.

There was never a major fire at the Westown Theater. There was a fire that gutted one of the auditoriums at the Kingston Four Theatre on December 21, 1979. The only news that appeared in the newspapers after the showing of “The Last Temptation of Christ” was the trial of the former City Councilman who had run his car (while intoxicated) through several protesters in front of the theatre. The theater continued to operate until Cineplex Odeon closed the theater on June 28,1990, along with several others around the country. Link I also posted the final add in the photo section.

Thanks tntim. I always wondered who did that, do you remember the name of the councilman?