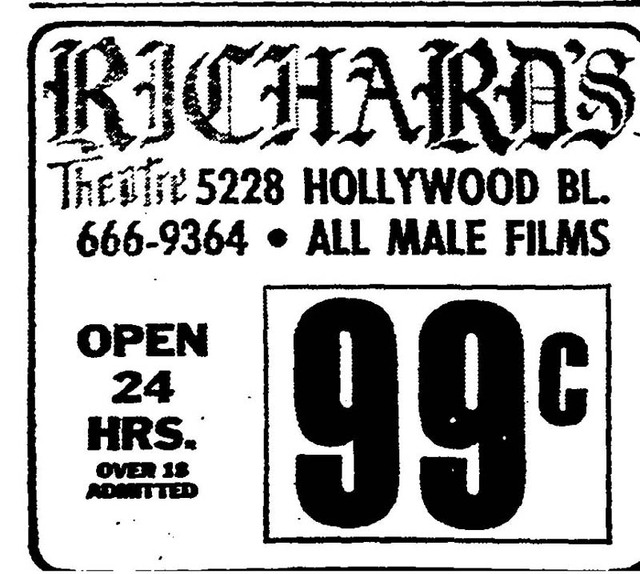 Richard’s Theatre was opened on January 7, 1971 and was still operating in 1977 as a gay male adult theatre. Originally one of many retail stores in this Spanish Renaissance style retail/apartment building, it is currently in use as a travel agents.

The same operator may have run another adult theatre a short distance from this one. The Bruce Torrence Hollywood Photograph Collection has a photo, dated 1974, which depicts Richard’s #2 Adult Theatre wedged in a storefront, between a Thai restaurant and “Danny’s Big 20”. The theatre’s sign depicts two female silhouettes, so I assume the venue ran straight adult programming. The building depicted appears to be the structure which still stands at 5533 Hollywood Blvd (currently the Gershwin Apartments).

Richard’s earliest newspaper listing appears to have begun on January 7, 1971. A group ad, promoting “Now 4 Theatres With The Newest Frisco Films” and memberships being available; Richard’s is listed with the Los Angeles area Cine 1 and Flick, and North Hollywood’s Sahara.