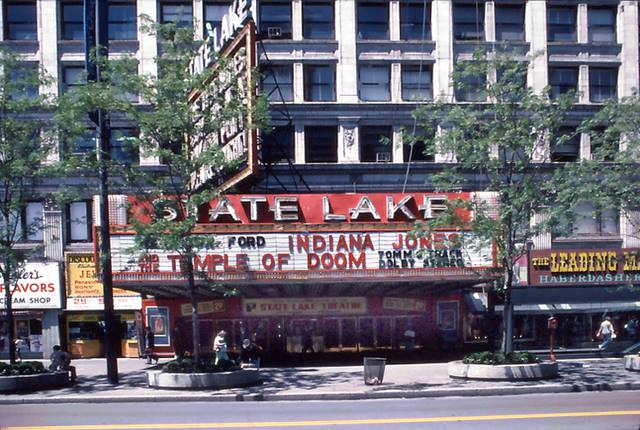 Built in 1919 as a vaudeville house for the Orpheum Circuit, the State-Lake Theatre opened on March 17, 1919 with Trixie Friganza topping the bill. Fronted by an office building designed by architectural firm Rapp & Rapp, the auditorium was designed by architect G. Albert Lansburgh. It later became the major venue for the RKO theatre chain in Chicago (along with the Palace Theatre on W. Randolph Street). The theatre is named for its location on the corner of N. State Street and W. Lake Street, across the street from the State and Lake “El” Station.

After closing on June 28, 1984, the State-Lake Theatre’s interior was gutted and converted into studios and offices for the ABC network’s Chicago affiliate, WLS-TV.

The Rapp & Rapp designed exterior was restored to it’s 1920’s appearance (except for its marquee and ticket booth) and is still quite an impressive bookend to the Chicago Theatre across N. State Street.

I wonder why there is so little photo documentation of the lobby or auditorium? I found 1 grainy pic of the interior…that was it!!!!!

The State Lake is the only Chicago theater I never saw a movie in. My Dad would drive our family in his 1966 Chrysler Newport “downtown” in the evenings and I do recall seeing outside the State /Lake one evening quite large advertising for One Million Years B.C. in 1966 with a life size cardboard cut out of Raquel Welch dressed in fur skins standing outside the glass doors! Years later, my friend who worked with me in theater, invited me across the street from the Chicago Theater we were working a theatrical play to visit with her husband who worked for Channel 7 for a tour of the Channel 7 facilities. The former State/Lake theater is still preserved in the Channel 7 facilities. From the news studio, to Oprah’s former studio. One could see evidence of the former theaters self. I’m glad I was able to observe architecture of the former theater.