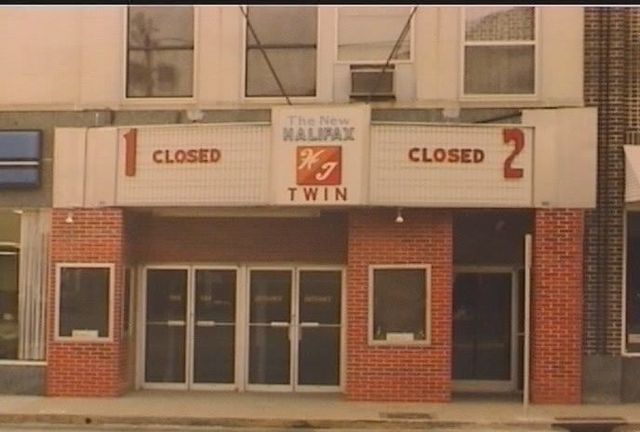 Open till ~1969? Can anyone verify the exact date?

Owned by Neighborhood Theatre, Inc. of Richmond, Va. Morton G. Thalhimer, Chairman of the Board, they had over 30 theaters in Virginia.

I got to see “Song of the South” for the very first time in this theatre. My parents took my cousins, my sister, and me to see SotS when Disney re-released it in the early 1970s. What a wonderful experience!

The most recent update at the MySpace page of Sobo’s Main Theatres advertises Hellboy II: The Golden Army as the current attraction. As that movie was released in 2008, that’s probably when the theater closed. The last blog post by the theater’s manager is dated June 16, 2008.

The photo uploaded by wsasser shows that the Halifax Theatre, then called the New Halifax Twin, is the same house that was later called Sobo’s Main Theater. It had apparently been un-twinned. The Sobo’s sign is still on the marquee in current Google street view. The correct address of the theater is 532 N. Main Street.

I don’t know when Sobo’s Main Theater opened, or how long it operated, but in 2009 the building briefly housed a dance hall which soon lost its license due to rowdy behavior by the patrons. 2008 remains the most likely closing year for Sobo’s Main Theater. Use as a dance hall means at least some of the seats must have been removed, and perhaps the floor at least partly leveled.

I don’t know when it closed as the Halifax, but Dragonlace1’s comment notes a showing of the early ‘70s re-release of Disney’s Song of the South, which the studio re-released in both 1972 and 1973. The Halifax might have been open long after that. The NRHP nomination form for the South Boston Historic District mentions the New Halifax Twin, but doesn’t say if it was open at that time, though the name does indicate that the house was twinned by 1986, the year the form was prepared.