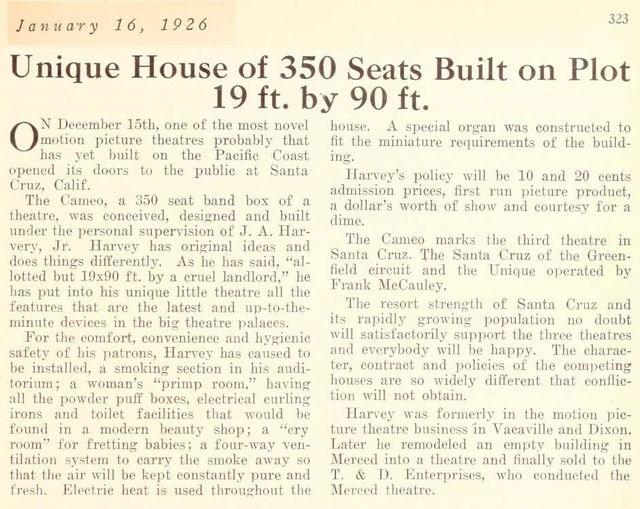 This small theatre opened on December 15, 1925 as part of a commercial building located on Pacific Avenue (between the terminus of Soquel Avenue and the cross street of Cathcart Street) on the piece of property immediately to the South of the future site of the Del Mar Theatre.

The facade was a multistory Neo-Classical front with office windows above and retail entrances and the theatre entrance below. The auditorium extended into the city block beyond the rear of the office portion of the building. An early photograph of the building taken when the theatre was operating shows a very typical 1920’s style vertical sign and rectangular marquee attached to the facade.

After the Cameo Theatre’s closure, the theatre space housed retail, including for many years, a tavern. The upper two-thirds of the facade survived completely unchanged for the entire life of the building, and the windowless brick shell of the auditorium remained plainly visible from the back alley, close and parallel to the comparatively mammoth bulk of the Del Mar Theatre. The 1989 Loma Prieta Earthquake damaged the entire building beyond repair, and it was demolished.

The 1929 Film Daily Yearbook listing gives the Cameo’s seating capacity as 400. This would certainly jibe with the size of the auditorium structure which I recall behind the commercial block portion of the building.

The Cameo Theatre is first listed in the 1928 edition of the Film Daily Yearbook, but with no seating capacity given. However, the Cameo is mentioned in the Santa Cruz Evening News of December 15, 1925, which said the new house was to open that night. The Cameo boasted something called an Orthophonic Victrola, a Leatherby electric piano, and a soundproof cry room where parents could take squalling children and still watch the show. I think this is the earliest instance of a cry room I’ve yet come across.