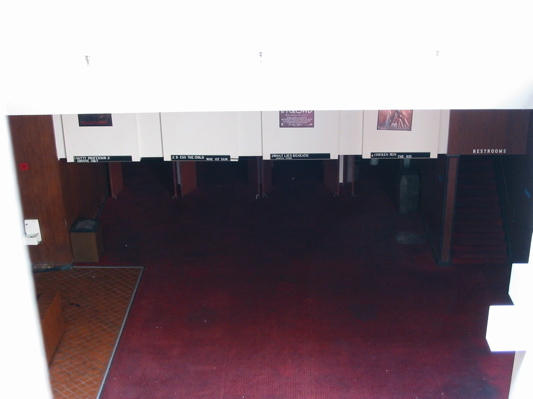 This was a very busy theater when it opened on December 20, 1974. The box office was located on the second level of the two-story mall. Patrons purchased tickets upstairs and rode the escalator downstairs. The entire lobby was open and you could look into it and throw things at the customers or spit on them. It was hell running this theater when the escalators broke down. We had to put a cover above the snack bar or people would spit on the attendants. The largest grossing film was “Grease” which played on three screens. The theater was always booked first run. It closed on December 10, 2000 and was demolished in December 2004.

It did not always book first run; in its last years, it was known as the Tanforan Discount Cinemas, and I think it became an independent.

The UA Tanforan 4 Cinemas opened at the Tanforan Park Mall in San Bruno, California circa 1970. During the 70s and early 80s, the theatre was often United Artists' highest grossing venue in Northern California. The cinemas consisted of 4 auditoriums on the lower level of the mall, accessed by escalators behind the box office on the main level of the mall adjacent to the west parking lot entrance. The lobby of the theatre was open to the upper level and mall skylight. The largest of the 4 auditoriums (#3) featured approximately 600 seats and was utilized for the larger blockbuster releases. Above the door of each auditorium was a reader board with the film title and a large, colored, plastic numeral denoting the auditorium number. The booth had Christie projectors and utilized a platter system. For its time, it was a spacious, modern and comfortable cinema with decent sound and projection, though only auditorium #3 featured stereo sound. The space formerly occupied by the cinemas is today the lower level of the Barnes and Noble book store.

I saw the movie Coma there in 1978 and the movie Survive there in 1976, the mall opened in 1971 and Im almost positive that the theater opened at the same time.

I am 99% sure this theatre opened in 1975. I recall shopping at Tanforan during Christmas 1974 and looking down from the mezzanine above at the partially completed theater and thinking it looked abandoned. Several years later when it was closed – it looked more beat up, but also looked abandoned, and then it was removed. I saw a lot of movies in this place before it closed.

This opened on December 20th, 1974. Grand opening ad in photo section. It was promoted as “4 theatres of the future”

The entrance to the Edward’s Westminster Mall Cinemas in Westminster, CA looked similar to the box office/entrance area of Tanforan. Both built by UA, but the only two I’ve seen that looked so similar.

You can see a little of the big green number 4 in this picture: http://www.cinematour.com/picview.php?db=us&id=59800

Like Cinedome Fremont, Meridian Quad, Alexandria SF and Festival in Walnut Creek, this was one of the best AND worst theaters I’ve been to ever! Wonderful times!😍😍😍