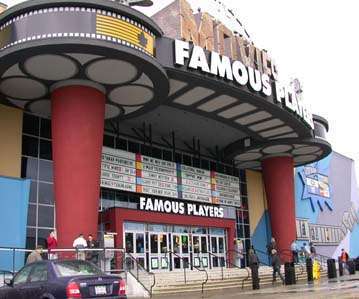 The Riverport Cinemas was opened on December 19, 1997 by Famous Players with 12 screens. Six more screens and an IMAX theater were added on December 18, 1998. There was only sparse use of the IMAX theater through 2004. For the 19 auditoriums seating is listed at 4,508 with the smallest seating 168 and the largest 446.

I remember going this theatre on opening night when Titanic premiered.

I think this theatre had the fourth or fifth highest ticket sales in North America during its first five or six months of operation.

People were driving in from all over the lower mainland to experience the first “Jumbo” megaplex.

I remember the first six months well. They were cancelling new movies that were opening up that night ( it was a Friday and the film that was cancelled was Deep Rising ) to interlock Titanic on another screen.

The line ups were enormous and the ticket prices were very expensive for the time ( $9.75 ).

Very similar experience with the X-Files Movie later that year with the huge lineups. Everyone from the Suburbs got tired of watching films at theatres that hadn’t been updated in 15+ years and Stadium seating was a big deal!

I also experienced the 2002 1.3K DLP projection of Star Wars Episode II. It didn’t look like anything that is available today. Bright scenes looks like video and they were running a 35mm print in tandem with the DLP system because it was unreliable and the 35 would take over in the event of a breakdown.

Update: The IMAX 15/70 film system (screen #19) will be replaced with the IMAX Digital system in Spring 2012. Screen #1 will be converted to Ultra AVX, meaning that both AVX & IMAX will be in the same complex. Currently, screens 1-18 are all digital.

The Imax film projector remains installed along side the digital system.

The “Famous Players” lettering has been removed from the building as they are gradually rebranding it to Cineplex.

It will be sad when they finally phase out “Famous Players” as the name has been a film staple across Canada since the 1920s.

This is the first SilverCity to be built on the west coast, opening on December 19th, 1997. Grand opening ad posted. 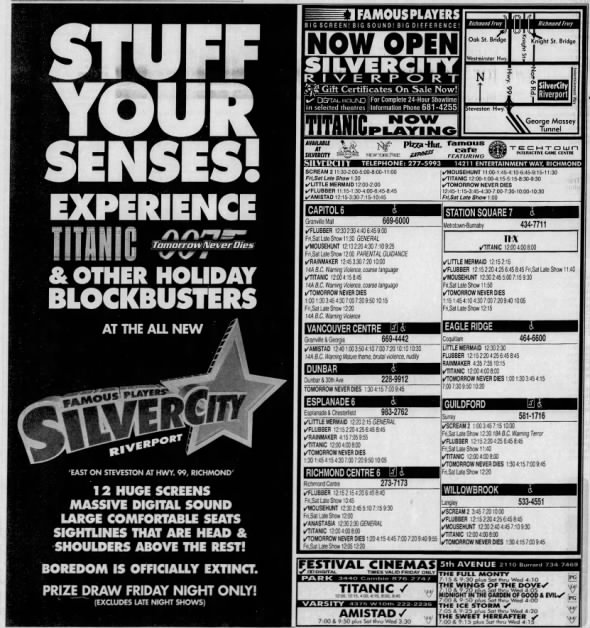 The name should be changed to SilverCity Riverport Cinemas.

The extra six screens and the IMAX theatre opened on December 18, 1998. The IMAX’s first features were T-Rex: Back to the Cretaceous in 3D and Mysteries of Egypt in 2D. The IMAX closed on January 14, 2001 with its final film being CyberWorld 3D, but was re-opened on November 10, 2004 with The Polar Express in IMAX 3D.