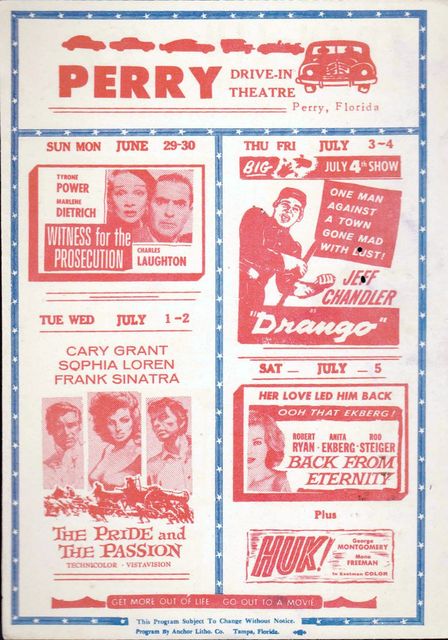 The Perry Drive-In was located on US 98 south of the small town of Perry, named for American Civil War general Matthew Perry, who was the 14th Governor of Florida.

Here is a 1951 aerial photo of the drive-in, courtesy of Earth Explorer and USGS.

Rick. It parked 150 cars and was owned by L.Graves and C.Knight,Noticed Perry had the Community Outdoor Drive-in Theatre in 1956.

This drive-in advertised itself as the place “Where Happiness Costs So Little”. There are two handbills on its page at Drive-ins.com; it was one of the ozoners that used creativity (or mindlessness) in pairing up its features: http://www.drive-ins.com/gallery/fltperr

@Mike: I wonder if the Community Outdoor Theatre and the Perry Drive-In were one and the same. It was not unusual for drive-ins to change names when they changed operators. The only way to know for certain is to research newspaper microfilm, or check with the local residents. This town didn’t seem large enough for two drive-ins, let alone three.

NY,you could be right,but in my 1956 Motion Picture Almanac[which i have found out from CT members to be not 100% correct]Has both Drive-ins listed.I was in an old Closed Theatre years ago and wished I would have Grabbed every Almanac there,I am sure they are in a Landfill now.

@Mike: I’ve seen almanacs which listed the same theatres twice during the same year, so anything is possible. When I was researching New York drive-ins for NewYorkDriveins.com, I made a point to research every newspaper for every location, and found there were several locations doubled up, more so in the almanacs than in the catalogs.

Similar situations were found for other drive-ins around the state, too many to mention. The only way to know for certain is to check with a local resident who’s lived in the town at the time the drive-ins were open, or to research the newspaper ads from the microfilm.

Yeah,too bad all the CT members can’t be in all these smaller towns that have Newspaper Archives in town.I guess we will never get them all on.Especially Drive-ins some only lasting a season or less.

Perry had a Graves Drive In theatre, part of which is still intact. Could this have been a rename of the Perry Drive in?

I can tell you the address above (2273 S. Byron Butler Parkway), is not the address of Graves Drive-in. Graves Drive-in restaurant, which is open year round, and the shell of the old drive-in concession building are still on site.