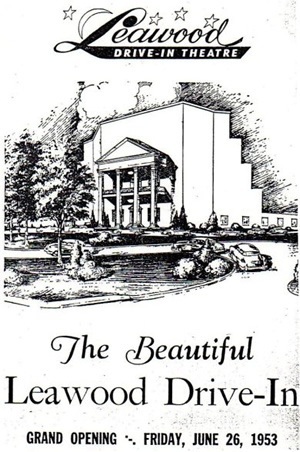 The Leawood Drive-In was a single screen drive-in theater located on the west side of State Line Road. It opened June 26, 1953 with Jean Peters in “Lure of the Wilderness” & Howard Hill in “Tembo”. Operated by Dickinson Theatres, advertisements listed the location as 120th and State Line. However, that would locate it on the slope of a hill and I do not remember it as being on a hill. My recollection is that it would have been on the top of the next hill at about 123rd Street.

According to the view at HistoricalAerials.com this theater was located on the NW corner of 123rd St. and State Line Road

Thanks for the link! That proves that the south boundary was what is now 123rd Street, and the north boundary was south of 121st. I have old KC Star newspaper ads in which the Leawood states that it is located at 120th and State Line, so apparently there was some re-numbering of roads at some point.

I didn’t remember the ’S'-curve type entrance road but the photos don’t lie.

I never really cared about the exact address …

I mean, I’d just drive south on State Line Road and turned right at the last drive-in theater before the airport.

1955 aerial uploaded here. It looks like it was still under construction.

I remember that week in 1953 when the theater opened. The Manager Frank Phipps worked for Dickinson and lived in a little house next door south of the theater.

The theater was impressive and had an elegant facade like Tara from Gone With the Wind. The property was on the outskirts of some high priced properties and large estates and homes were being built.

I was friends with the Projectionist and would spend time in the booth while he ran the movie. It had very hot “arc lamps” and they were water cooled like a radiator and always leaked. The booth was next to the Concession Stand so when the door was opened you could see in the booth. The two projectors were SIMPLEX XLS with large arc lamps. The screen seemed a mile away which presented a problem.

The theater was designed in 1952 and opened in 1953 a year before Cinemascope and a year later this large square screen was not wide enought for Cinemascope and the picture ran off the right and left edge when they booked Cinemascope films.

Near the screen was a small KiddieLand with swings, a merry-go-round
and other kid’s toys. Something for Everyone.

My grandparents wanted to see LOVE ME OR LEAVE ME a Cinemascope film and I remember them setting in the car looking at a partial picture.

My favorite memory was watching RIDERS TO THE STAR a 1954 early Cinecolor movie about exploring near orbit space. I loved the film and still do. When the film closed I took the large poster and still have it. I also have the 35MM Projectors from the theater I acquired several years after the theater closed. They were transferred to the Fairway Theatre until it closed. The Leawood Drive In was glamorous in design, it fit in the area and when the land became valuable it was sold and sub-divided.

A more accurate address for this theater is 12120 State Line Rd, Leawood, KS 66209. This points directly to the entrance road. The entrance is now the UPS Store. Part of the neighborhood west of the shopping center was the drive in itself.

This one’s for you, WadeWilliams. From the April 17, 1954 Motion Picture Herald:

The Leawood drive-in had “Riders to the Stars,” Wednesday through Saturday, first run in Kansas City. The drive-in is near the southwest corner of Kansas City, Mo.

Boxoffice, July 4, 1953: “The Leawood Drive-In was opened Friday (27)(sic) to a near-capacity crowd. A Dickinson Theatres operation, its screen tower is designed as to look like a southern mansion from the highway, with lamps in windows and other decorations carrying out this same pleasing effect. Inside are the manager’s office and storerooms. … Fireworks were set off between the two films, “Lure of the Wilderness” and “Tembo.” ”