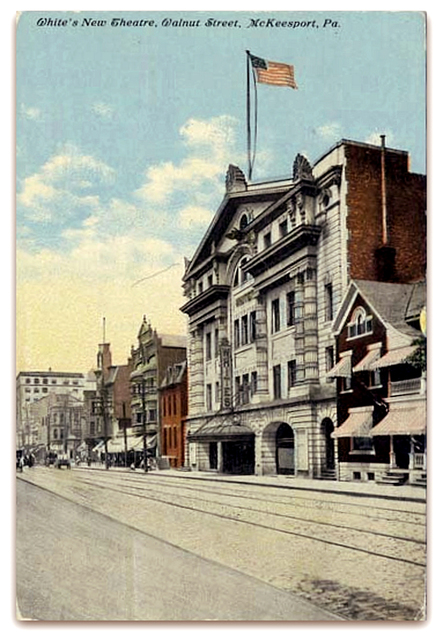 White’s New Theatre was opened in 1908. It was renamed Harris Theatre in 1920. By 1941, it had been taken over by Warner Bros. Circuit Management Corp. and was listed as (Closed). It was demolished in the late-1940’s.

The theatre appears to be demolished but the building next door at 1005 Walnut Street is home to something called the Theatre Bar. View link

The book McKeesport, by the McKeesport Heritage Center Volunteers, has an interior photo of a Whites Opera House, but gives its location as the corner of 5th and Walnut. The book doesn’t mention White’s New Theatre, but says that the Opera House was built in 1883, became the Gayety Theatre by 1907, and closed as the Orpheum in 1922. The building was replaced by a department store in 1941.

However, a book called Vaudeville Old and New lists both a White’s Opera House and a White’s Hippodrome Theatre as having been part of the B.F. Keith circuit in McKeesport, though it doesn’t give their years of operation. Confusingly, it also lists a Harris' Hippodrome Theatre in McKeesport, and that might have been the same house under different ownership at a later time. As the Opera House became the Gayety then the Orpheum, perhaps White’s New Theatre became the Hippodrome?

From Mckeesport a postcard image of White’s New Theatre.

McKeesport, by Michelle Tryon Wardle-Eggers and John W. Barna (Google Books preview) says that White’s New Theatre opened in 1908, and was designed by local architect Henry J. Lohman. It was primarily a legitimate house until sold to J. P. Harris in 1920, at which time it was renamed the Harris Theatre. It was demolished in the late 1940s.

There is a late photo of the Harris Theatre just below the map on this web page. The caption says the building was partly demolished in 1943, but the remaining part of the structure was incorporated into a building that is still standing, housing Pozutto & Sons Plumbing.

I believe we have the wrong address for this theater. Pozzuto & Sons (I misspelled it as Pozutto in my previous comment), on the site of the Harris Theatre, is located at 635 Walnut Street. I’ve also found historic reference to the Hippodrome Theatre being on Walnut Street near 7th Street.

I Think that White’s OPERA HOUSE, and Whites NEW THEATRE are two different buildings. If I remember my McKeesport lore, I think the older of the two (Whites Opera House) was demolished to make room for Cox’s Department Store (a building that is also now gone!)

There were two Hippodrome’s in Mckeesport. The one on 7th & Walnut was being demolished in the late 30’s. A lady on the McKeesport Past Facebook page posted a 1939 news article of her mother’s brother accident at the theater’s demo site.