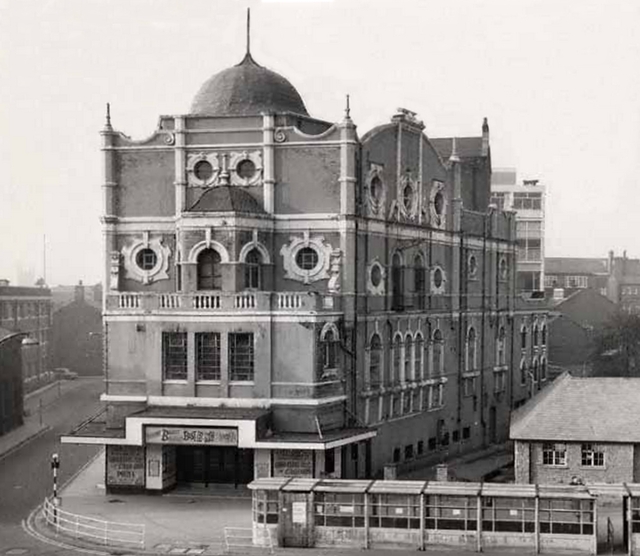 Located on the corner of Jubilee Street and Railway Road, opposite Blackburn Railway Station. The Palace Theatre of Varieties was opened on 11th December 1899, and was designed by the architectural firm Wimperis & Arbour, assisted by W. J. Sprague. Operated as a variety theatre by the Livermore brothers, it had a total seating capacity for 2,500, of which 1,000 of these were in the gallery at the top of the theatre. The theatre had 25 feet wide proscenium and a 30 feet deep stage.

Within months of opening the Livermore brothers had gone into liquidation, and the Palace Theatre of Varieties was taken over by the Sheffield based MacNaghten Vaudeville Circuit from 10th September 1900. Films were then being screened as part of the variety bill, and this continued for many years. Harry Houdini and later Gracie Fields were two of the top acts to appear at the theatre. It was closed as a variety theatre in June 1932, and lay dormant for several years.

The building stood empty for three years until 1960, when the Hutchinson chain, based in Burnley, then took over the Palace Cinema and refurbished the building, re-opening it for ‘Continental’ films and some live shows. By 1964, it had been converted into a bingo club. The facade was covered over with metal sheeting to give a ‘modern’ look to the building.

The building was twinned and bingo continued in the former stalls area, while a cinema opened in the former circle on 27th December 1975 with "Sharks Treasure". It boasted to have the largest screen in Blackburn. The Palace Cinema was closed on 28th January 1984, with Michael Caine in "Educating Rita". The bingo club downstairs also closed on the same day.

The building lay empty for a few years, and was demolished in November/December 1989 for a car park to a new building housing the Telephone Exchange, which was built on the site of the Grand Theatre.

Apparently in 1995, there was still a 30 foot length of the lower wall, just 3 feet high standing.

Vintage photographs and memories of the Palace Theatre:
View link

There is a picture of the Palace Theatre here; it was for sale at the time the picture was taken: http://tinyurl.com/4b48gp4

Thanks for photos Ken and Chris.

The 1964 refurbishment for the Bingo and the conversion to Cinema-Bingo was carried out by Modernisation Ltd.,

During the 1980’s I undertook a photographic study of Blackburn for the Arts Council. Here are a series of, to those of us who love these buildings, sad images of the Palace Cinema during demolition