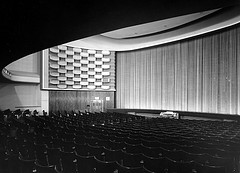 Located in St. Aldate Street, facing Kings Square, the Regal Cinema was the last picture palace built in Gloucester. Construction work started in 1939 to the plans of Associated British Cinemas(ABC) ‘in-house’ architect W.R. Glen, but was delayed by the outbreak of war.

Building recommenced in 1955 when restrictions were lifted to a modified plan by architect W.R. Farrow, which included a 25 feet deep stage and five dressing rooms. Seating was provided for 1,006 in the stalls and 462 in the circle.

The Regal Cinema was opened on 19th March 1956 with Janette Scott in “Now and Forever” and “Night Plane to Amsterdam”. For the first two weeks Hubert Selby played at the temporarily installed Hammond electronic organ. The first stage show starred singer David Whitfield which played for 6 days from 16th April 1956. From then until 1974, many top name stars and annual pantomimes appeared on stage at the Regal Cinema.

In March 1963, it was re-named ABC. It was taken over by EMI in February 1974, and was closed for conversion to a triple screen cinema on 6th April 1974, with the final film screen in the single auditorium being “The Legend of Frenchie King”.

The building was purchased by the JD Wetherspoon pub chain and converted into one of their bars, opening as The Regal on 3rd April 1996.

Thanks for posting the photos Ken.

Where could I get a list of performers who graced the stage of the Regal?