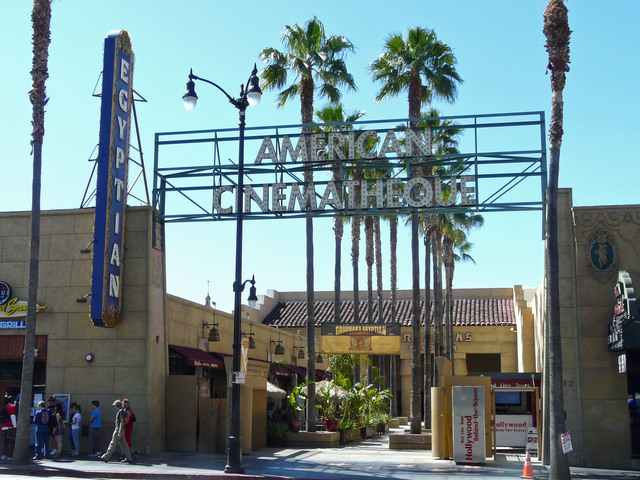 Builder Charles E. Toberman recruited Sid Grauman to open the first of the grand Hollywood movie palaces and in 1920 when it was first announced, the plans were for it to be designed in a Spanish style. The Egyptian Theatre cost $800,000, was constructed over 18 months and had a seating capacity of 1,771 (all on one level). The Egyptian theme was chosen for the name and décor to take advantage of the excitement drawn by the discoveries and searches in Egypt for ancient artefact such as King Tutankhamen’s tomb (which was discovered by Englishman Howard C. Carter on 26th November 1922;five weeks after the Egyptian Theatre opened). Architects Mendel Meyer & Phillip W. Holler of the Milwaukee Building Co. designed the building with decorator Raymond M. Kennedy in charge of decorative details. This theatre was among the first of many Egyptian Revival style theatres in the US.

A world premiere presentation of Douglas Fairbanks in “Robin Hood” was shown at the first ever ‘Hollywood Premiere’ at the grand opening of Grauman’s Egyptian Theatre on October 18, 1922 and continued to be screened until the first week of April 1923. The next attraction was “The Covered Wagon” followed by “The Ten Commandments” which premiered at the theatre on December 4, 1923. This was followed by “The Thief of Bagdad” and all had long runs, in fact Grauman’s Egyptian Theatre only played four movies in its first three years of operation. Grauman also presented an elaborate live stage show ‘Prologue’ with each performance of the movies.

A large curved Todd A-O screen was installed for the Roadshow engagement in 70mm of “Oklahoma” which had its West Coast Premiere on November 17, 1955. Sadly the installation of the huge 75feet wide screen led to the demolition of the elaborate original Egyptian style proscenium arch. A new projection suite was built at seating level in the rear of the orchestra seating and the auditorium walls were covered in yellow drapes. It was most likely that it was at this period of time that the original Wurlitzer 3Manual/15Ranks organ was removed from the building.

From 1949 until it closed in 1992, United Artists were the operator of the Egyptian Theatre. From the 1970’s, 20th Century Fox movies were showcased. In 1969 a huge curved movie screen of about 90 feet wide was installed. On July 19, 1972 United Artists added two small auditoriums Egyptian II & III in what had been a store on the east side rear of the theatre.

In its last years United Artists were operating the Egyptian Theatre as a last run discount house with $1.50 admission.

After closing in 1992, the main original auditorium was was shuttered, while the screens Egyptian II & III were converted into live theatre use. The original Egyptian Theatre was badly damaged in the 1994 Northridge earthquake. The City of Los Angeles had purchased the theatre a few months before the earthquake and so that it could be re-opened, ownership was transferred for $1.00 to the American Cinematheque. This classic movie theatre was given a stylish multi-million dollar make-over and renovation. The palm tree lined forecourt was restored to its original grandeur. The interior was renovated with solid, minimalist quality and state of the art technology. The main auditorium named for philanthropist Lloyd E. Ringler was reopened with its original, ornate sunburst ceiling and 616 seats. The screen is 53 feet wide and 27 feet high. A second theatre named after donor Steven Spielberg, is downstairs, and has 78 seats.

A key part of the revitalization of Hollywood Boulevard, the theatre reopened to the public, appropriately, with “The Prince of Egypt”. Among the celebratory reopening festivities was the ‘Vintage Premier’ of the 1923 version of Cecil B. DeMille’s “The Ten Commandments” starring Theodore Roberts on 4th December 1998, the exact 75th Anniversary of the film’s original World Premiere at Grauman’s Egyptian Theatre.

In the meantime, the former Egyptian II & III screens have been re-opened as the Arena Cinema in 2013, but are not associated with the American Cinematheque.

In October 2019 Netflix were in talks to be co-operator of the Egyptian Theatre and to screen their movie “The Irishman” which began its run in November 2019. On May 28, 2020 Netflix took over the operation of the theatre. Closed due to the Covid-19 pandemic, Netflix decided to restore and renovate the Egyptian Theatre as far as possible back to its original look. The small Steven Spielberg screen has been removed and the interior installed by the American Cinematheque has been removed.

On page 8 that is a very impressive screen. What years did that exist in the theater?

Update to an earlier story also in the link.

its interesting the ad for Marooned on pg. 1 of the photo section states the film is presented in the D-150 process. the late but great Rivoli Theater in Manhattan for the longest period of time had a small sign atop the main marquee stating it was a D-150 theater. but to the best of my knowledge never presented a film in the D-150 process.

how long was Hawaii’s roadshow engagement at this
theater?

The Pig N Whistle, which occupied one of the Egyptian’s retail spaces, was recently remodeled into a Mr. Tempo Cantina. While the unit has seen remodels and tenant changes before, this latest incarnation of the Pig N Whistle had meticulously recreated the venue’s historic 1920’s look. Unfortunately, that history was unceremoniously cast off and replaced with a “hip” modern style for the cantina remodel.

The other retail units at the Egyptian (most recently occupied by a juice bar) remain vacant and boarded up.

to MSC77- thanks for the info. just out of curiosity could a theater get out of a roadshow engagement if the film wasn’t doing well even if they signed a contract with a studio to show the film for however many weeks or months? the reason I ask is simple. I happen to like The Greatest Story Ever Told and saw it twice during its roadshow run “in Cinerama” at the Warner Theater in Manhattan. now after the box office tallies for 1965 were added up the TGSET was considered a financial loss for United Artists. to which my question- why in God’s name would the Warner have hosted a roadshow engagement of TGSET for 44 weeks if it wasn’t making $$$?

Maybe it was a good buisness for the theatre, but to small for the producer.

Ben Sack a theater owner in Boston booked a turkey. When he couldn’t get out of running it he let people in for free and started a long running feud with the producer.