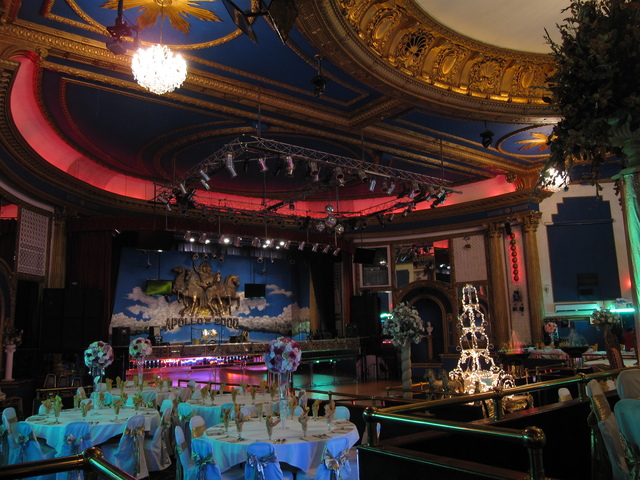 Opened December 22, 1917, the Marshall Square Theatre was designed by architect Alexander L. Levy, who later teamed with William J. Klein to go on to design some of Chicago’s greatest movie palaces, like the Granada Theatre and Marbro Theatre. It was located in the Marshall Square neighborhood on W. 22nd Street near S. Marshall Boulevard (W. 22nd Street was later renamed W. Cermak Road, after the Mayor of Chicago, Anton Cermak, 1931-33, who died from a bullet in Miami meant for President Franklin Delano Roosevelt).

Originally a venue for both vaudeville acts as well as movies, the Marshall Square Theatre later switched to a movies-only policy, until the screen went dark in the 1970’s.

In 1936, architect Roy B. Blass remodeled the Marshall Square Theatre, and new signage was added on the the elegant terra-cotta covered facade. One of the support beams for the soaring vertical sign was unfortunately rammed right through the large terra-cotta face of a beautiful goddess above the main entrance, sadly destroying it.

Today, restored and renovated in the 1990’s for use as a concert hall, the Marshall Square Theatre is now known as Apollo’s 2000. Did this theater show Spanish language movies in the late 1970’s early 80’s?

Broan The Apollos 2000 is more similar to the Brighton Park and The Metro Theatre. (Now demolished) The Howard is more similar to interior design. The Metro was almost identical except that the arch and in the back of the Theatre had bleacher type seats. The Brighton Park had a balcony and looked nothing like the Apollos 2000 Theatre on the inside but on the outside were extremely similar.

Why is this listed as Apollo 2000. That is the club name and it never showed movies under that name. It should be listed as Marshall Square theater. It started showing movies in Spanish in either 1967 or 1968.

So many memories, movies and several hour long all-cartoon afternoons !

This opened on December 22nd, 1917. Its grand opening ad can be found in the photo section.

There was a Theatre Historical Society tour through the MARSHALL SQUARE in about 1984 as it still operated as a cinema.