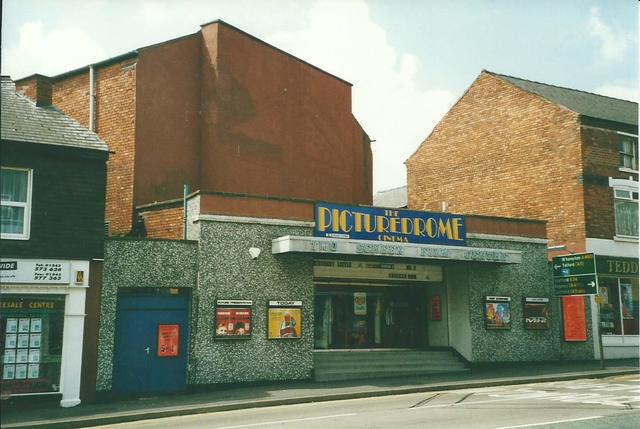 The Picture Palace was opened on 6th April 1914. Originally, it had 650 seats on a single floor it was designed by architect C.W.D. Joynson of Wednesbury. The screen was at the entrance end of the building. In October 1919, a 242-seat balcony was added, bringing the total seating capacity up to 842. It was re-named Picture House in 1920. By 1937, the seating capacity was 933.

The Picture House was taken over by the Newcastle upon Tyne based Essoldo Cinemas chain on 1st September 1968. It was remodeled and modernised, reopening as the Essoldo on 7th September 1969 with John Mills in "Oh! What a Lovely War". Seating was now provided for 403, in a luxurious curtained auditorium.

On 7th April 1995, an independent operator took over and it was re-named Picturedrome. This was closed on 25th February 2005. The building suffered damage by a fire in July 2008.

However, it was refurbished and re-opened as the Electric Palace Picture House on 13th November 2009. Now with three screens, the main auditorium has seating for 200 in the stalls and 60 in the balcony, the second screen at the rear seats 170, and a small third screen seating 40 has been created in another part of the building. It was refurbished in 2016 and re-named Cannock Picture House. The small screen 3 has been closed and is used for storage.

Now as it approaches its Centenary in April 2014 this Cinema is surely in the worst condition that its ever been in its whole life, a shadow of its former self.

The Electric Palace has undergone a few changes in the last year. It seems it is under new management, and is by all sense and purpose now called ‘ Cannock Cinema ’(although there are still various signs that read ‘ Electric Palace ’. Screen One and Two have had new seats installed ( I say new, but they show signs of wear and tear so are Second hand, but still better than the originals). Screen Two has a much bigger screen size than before, and both screens have a decent surround sound set up. Screen Three was never really used. The old management had ideas of kids parties or small presentations in that small area. The small screen and ceiling projector are there, but the whole room is now a storage facility.

I believe that architects was Hickton and Farmer of Walsall which is near by. The Building has many design features that Harry Farmer employed in his cinema work.