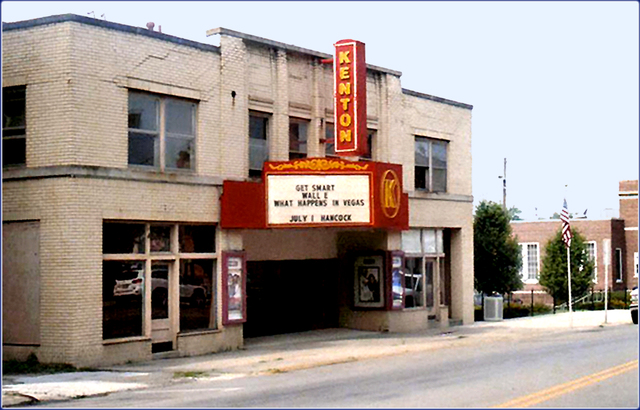 Built for the Schine’s Circuit Inc. chain the 1,200-seat Kenton Theatre opened in September 1929. Designed in a Spanish Colonial Atmospheric style, the Kenton Theatre once featured murals painted on the auditorium and lobby walls, which unfortunately, were lost over years of neglect.

In 1993, the Miller family, owners of the M.E. Theatres (which also include the Ada Theatre, in Ada, Ohio, the Elder Theatre, in Jackson Center, Ohio and the Hi-Road Drive-In, also in Kenton) acquired the decrepit Kenton Theatre and began to rebuild it.

The balcony was divided into two-115 seat auditoriums, while the main floor seats 400. All new seats replaced the old ones, and the Kenton Theatre was repainted, re-carpeted and given new air-conditioning, electrical and projection equipment as well.

In 1995, the Millers had a new marquee installed to recreate the 1930’s era marquee which had long since been removed.

A view from 1929 just prior to the opening of Schine’s Kenton Theater in Kenton, Ohio.

A view from 2008 of theKenton Theater in Kenton, Ohio.

I believe the Kenton and the Ada are both for sale. I’m not sure about the Hi-Road Drive-in. I believe the listing broker is Century 21 —sorry I didn’t write the number down but it should be easy enough to obtain

The Kenton Theatre is still for sale. Contact Becky Neville Century21 at 419-634-0021.
The Ada Theatre has been sold.

On Oct 2 2012 the Kenton Theatre turned 83. The current owners have owned it since 1993.
The Kenton is still for sell for info

Aug 2013 The Kenton Theatre was Sold to new owners.We ran it for 19 years.

Schine’s Kenton Theatre opened in September, 1929, according to the October 5 issue of Motion Picture News.