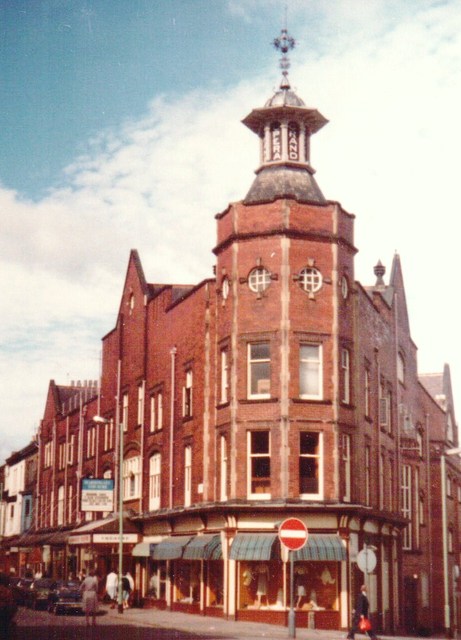 A late-Victorian theatre, The Grand Opera House opened on 11th January 1900 on an awkward triangular shaped site on Oxford Street and Cheltenham Parade.

The exterior is not its strong point, the principal features being a distinctive tower at the narrow apex surmounted by a cupola bearing the names Grand Opera and a pretty, usually flower festooned, iron and glass canopy bearing the current Harrogate Theatre name in coloured glass.

A small but very attractive foyer, with a deeply enriched plaster frieze by F. Darlington Esq. in an arts and crafts style, has stairs down to the stalls and up to the two balconies.

The auditorium is a sheer delight with a range of four boxes either side of the stage and a domed and richly decorated ceiling. Putti, garlands and cartouches decorate each of the serpentine balcony fronts.

Although constructed, and always used as, a live venue, the Harrogate Theatre has recently begun to screen films on Monday evenings. These are arranged by the Harrogate Film Society and digital surround sound has been installed. There are generally two screenings per month and a policy leaning towards ‘art-house’ is favoured.

Seating capacity on opening was 1,300. By 1952 this had reduced to 887 and currently, due to better legroom and the reduction in size of the top balcony, 475.

The Harrogate Theatre has had a chequered financial history since the 1920’s, often lurching from one crisis to the next. However it has survived, is presently gaining audiences and the future looks more assured now than at any time in the last half century.

The Harrogate Theatre is designated a Grade II Listed building by English Heritage.

DO YOU HAVE THE BOOKING ARRANGEMENTS AND TICKETS AVAILABILITY AS YET FOR THE SONDHEIM SHOW IN DECEMBER? LOOKING TO PURCHASE TWO TICKETS FOR DECEMBER 23RD EVENING IF AVAILABLE.
REGARDS
GERALD CLARK

WHY DO PEOPLE USE ‘CINEMA TREASURES’ AS A SITE TO REQUEST TICKETS FOR SHOWS? HAVE THEY NOT HEARD OF ‘TICKETMASTER’ OR EVEN ‘GOOGLE’!!!

DEAR EDITORS OF CINEMNA TREASURES,
IS THERE SOME WAY YOU COULD MAYBE FILTER OUT TICKET OR RESTAURANT REQUESTS? BY THE WAY, I’D LOVE 2 TICKETS FOR ‘HAIRSPRAY’ AT THE SHAFTESBURY THEATRE IN OCTOBER OR SHALL I TRY ‘EBAY’ !!??!!??

The auditorium and main foyer of the Harrogate Theatre were restored in the late summer/autumn of 2007. The chandelier remains to be installed, now having to wait until after the busy pantomime season has finished. Film Society screenings re-commence in January 2008 with “Offside”, during the closure the society relocated to the Cairns Hotel.

Photos of the restored theatre here:–

Um? What is that in the window next door???
Thats a beautiful facade and well restored.