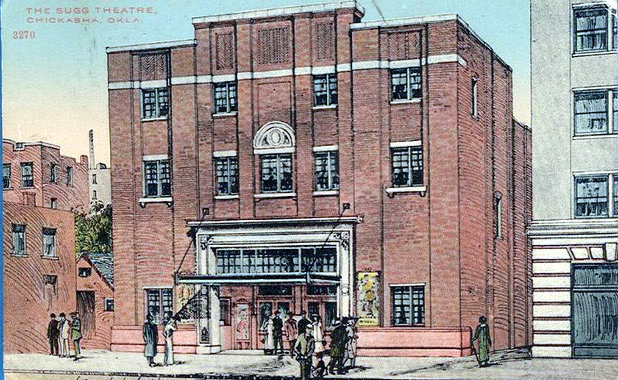 When J.D. Sugg died in 1925, the Waurika News-Democrat published an article noting some of the bequests made in his will. Among them was a bequest “…to MRS. BELL MCCOWN of Fort Worth, a niece and her children, the Sugg Theatre building in Chickasha and $5,000 each….”

There was also a reference to another theater in Chickasha that Mr. Sugg owned: “The Kozy Theatre building in Chickasha goes to J. D. LINDSAY of that city for life, reverting to the estate on his death.”

Either the Kozy is not yet listed at Cinema Treasures, or is listed under another name and is missing the aka. The Kozy was mentioned in the July 29, 1916, issue of The Moving Picture World, so it was at least that old.

I think it’s possible that the building currently on the site of the Sugg Theatre incorporates the lower portions of the theater’s side and back walls. Brick is pretty good at surviving fires. But as the theater had both a balcony and a gallery, and the current building is a single floor structure, the upper parts of the walls at least have clearly been demolished. The front is obviously post-fire construction, as it is mostly glass show windows.

This picture is actually of the building on the NW corner of 4th Street and Chickasha Ave. I believe the address is 390 West Chickasha Avenue. I was told it was the Wagner Opera House and then a dance hall during WWII. You can match the top of the drawing and the top of the building. During the 60s and 70s the downstairs was OTASCO and the upstairs was storage. Someone did start renovating it several years ago and put all new windows upstairs but I was told they ran out of money and left it.

There is no 390 Chickasha Ave, don’t matter what Google Earth says. The Sugg was in the 100 block of South 4th right behind the Petroleum Building. I am ot sure of the year of the name change to Washita Theater, but it did burn down in 1939. The new Washita Theater was bilt in the 500 block of Chickasha Ave and is still there. The Wagner Opera House was and the building still is on the NE corner of 4th and Chickasha.

The January 2, 1940, issue of The Film Daily ran this brief item about the destruction of the theater:

“Chickasha, Okla. — This city’s largest theater, the Washita, owned by Consolidated Theaters, Inc., Griffith subsidiary, was destroyed by a $50,000 fire.”

Joe Vogel,the “McDonald’s” that occupies the site of the Sugg is not a retail outlet, but was the corporate office of Harold Jackson the owner of the McDonald’s franchise in Chickasha. The name was changed to Washita in 1935 and was destroyed by fire Dec 27, 1939 and was never rebuilt. The actual address would be about 110 South 4th. The gray building on the right side of the picture is the Petroleum Building which is on the SW corner of 4th and Chickasha Ave.

Here is the location as it appears today. Mr. raybradley, the building across the street now known as Chickasha Mall was originally S.H. Kress store.

I now believe that the correct address of the Sugg Theatre was approximately the 110 S. Fourth Street that eferrell01 suggested.

This item is from the July 6, 1935, issue of Motion Picture Herald:

“Consolidated Theatres, Inc., subsidiary of the Griffith Amusement Company, recently opened the new Washita theatre, at Chickasha, Okla., containing the most modern equipment throughout, including air conditioning apparatus. George Limerick is manager of the house, which was constructed virtually within the old walls of the Sugg theatre, one of the oldest theatres in southwestern Oklahoma.”