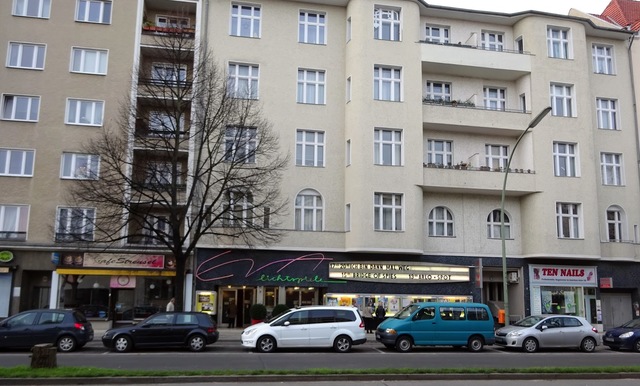 The Eva-Lichtspiele is a district cinema, in German ‘Kiez-Kino’, in the Berlin district of Wilmersdorf, a district known for its wealthy and pre-eminently elderly population. The cinema has existed since 1914 when it opened as the Roland Lichtspiele. In 1921 it is already known under the name of Eva-Lichtspiele after being remodeled by architect A. Kranz.

The cinema has, on the one hand, a mainstream or arthouse programme, ranging from “Ice-Age” to “Des Hommes et Dieux”. On the other hand, it specialises in children’s movies with its famous matinees. Most popular are its Wednesday afternoon screenings of old German films from the 1930’s to the 1950’s, where the theatre is often full.

The cinema is a one-screen cinema, a type of cinema which is still quite frequent in Berlin. The owners lay much value on tending to the client, thus there is a friendly and personal atmosphere. The foyer is very classical with a round concession stand in the middle and a few seats that allow people to sit down before being admitted into the screening room.

The screening room itself is classic retro, meaning featuring still its original style. The grey seats - all on one level - have a type of small desk in front of them where you can put down your drinks. In the last rows there are also sofas. The screen has a kind of white rain curtain which opens vertically. The walls feature a kind of velour, which give the theatre a very nice touch.

All in all, this cinema is an institution in Berlin-Wilmersdorf and as an independent cinema should be praised for its diversified offer and the dedication of its owners.