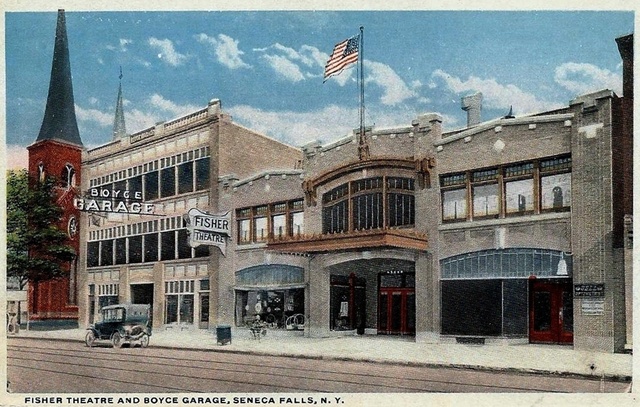 Brick and wood building, small marquee out front. The Fisher Theatre was opened October 8, 1915. Around 1930 it was renamed Strand Theatre. The owners in c.1960 made fresh popcorn at the refreshment stand in the lobby, which smelled so good, few could pass it up. The Strand Theatre screened good family entertainment. It was destroyed by fire on April 20, 1972.

Contributed by Joel in CT
Get Movie Tickets & Showtimes

Boxoffice of November 13, 1961, had an item about the sale of the Strand Theatre at Seneca Falls. The seller was the village board, and the buyers were Oliver and Adelyne Acheson, theater operators from Syracuse. The Achesons intended to renovate the house and reopen it.

The item said the Strand had been “…built about 40 years ago by Fred Fisher and later was sold to the Schine Theatre circuit.” A later owner, Clinton Young, had sold the theater to the village.

The last mention I’ve found of the Strand in Boxoffice is from September 19, 1977, when it is mentioned in passing as one of the theaters operated by Conrad Zurich, who also operated the Hollywood Theatre in Syracuse.

A photo on page 103 of Seneca Falls, by Frances T. Barbieri and Kathy Jans-Duffy, shows this block of Fall Street with the church just down the block from the theater. The caption says the house was originally called the Fisher Theatre. (Google books preview.)

The October 9, 1915, issue of The Auburn Citizen reported that the Fisher Theatre in Seneca Falls had opened the previous night. The Friday opening featured a three-act musical comedy called “Tonight’s the Night”, and a vaudeville show and movies were scheduled for Saturday night.

I lived in Seneca Falls within 1964 and 1969 as a child. Saturday double feature matinees at the Strand were a fond memory as this theater was quite a family spot. It seems, if my memory serves me right, circa 1968 was an ownership or management change. I seem to remember a venue change, possibly to Adult? Please forgive me if I am wrong. I had also heard that it had burned down.

Irgvanman You are right. I moved to Seneca Falls in 1978. My husband took me to my first ever triple X movie. It has since been demolished. It is the site of the Women’s Rights Museum and Park.

The Strand Theatre Was Heavily Destroyed By A Fire On April 20, 1972, And Was Rebuilt In 1974, Reopening That Year, As The Strand Cinema As A One-Story Concrete Block Building Lasted Until The Theater Being Demolished In 1990.

Does anyone have any interior photos of the Strand/Fisher original? It was quite grand as my childhood memory serves. That movie, “The Majestic” reminds me of it. One of a few others I was a patron of included Ventura, California’s “The Majestic Ventura Theater”, which underwent a changeover hosting concerts, prior though, we had sat in its balcony for “The Rocky Horror Picture Show”.