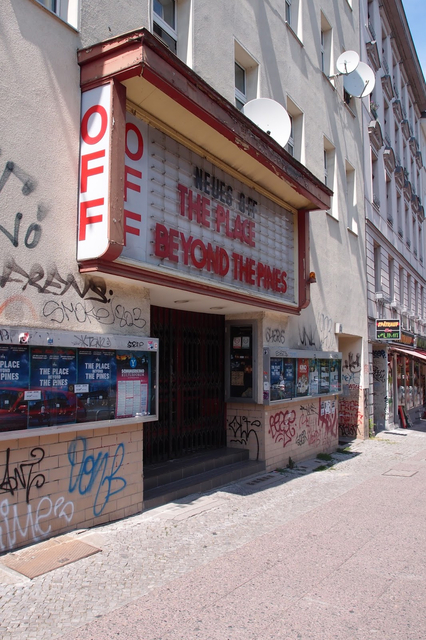 The ‘New Off’ Cinema in the southern Berlin district of Neukölln is ‘off’ in various senses. First of all, its situation is ‘off’ the traditional cinema sites and boulevards, like the Potsdamer Platz, Prenzlauer Berg or Kurfürstendamm. When it was founded, it took up programming films that were ‘off’ the mainstream, which appears to me the real reason why it was baptised ‘Off’ in the beginning (i.e. from 1979) and Neues Off Kino after a sound renovation in 1998.

The New Off Kino is a classical district cinema which has survived the otherwise brutal 1970’s and 1980’s that saw a myriad of other district cinemas die. Originally a ballroom, the site was converted into a cinema in the 1920’s named Rixdorfer Lichtspiele. The cinema operated as a red-light cinema during the 1960’s and 1970’s, and was taken up by the founders of the Yorck Cinema in 1979 and was made an arthouse cinema. In 1998 the cinema underwent an overall renovation, which has turned it into a gem, which, alas, goes a bit undiscovered on the Berlin cinema market.

The cinema boasts a charming foyer with a classical Sarotti concession stand (Sarotti is a brand of Berlin chocolate). The screening room is marvelous with 193 green cushioned and slightly reclining seats all on one level, however the back rows are slightly raised. The walls are nicely decorated and tasteful lighting gives the room a cosy atmosphere. A green curtain duly opens and closes before and after the screening of the film. The cinema screens arthouse films in the original version with subtitles or in the German version.

The Neues Off Kino recently celebrated its 30th birthday and it is thanks to the arthouse cinema chain Yorck that this beautiful cinema is still operating and is well programmed.