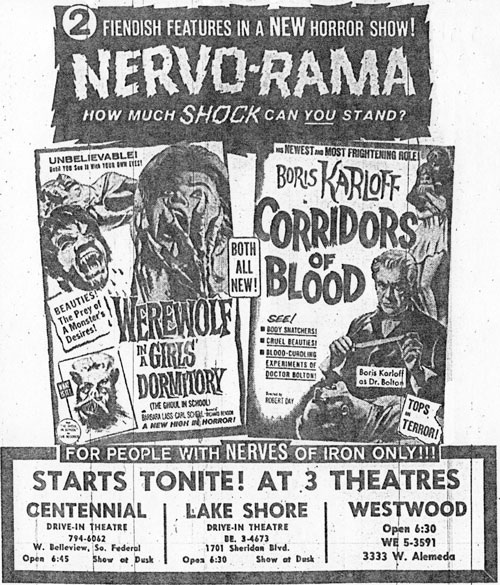 The Centennial Drive-In was opened April 17, 1954 with Richard Burton in “The Robe”. It had two CinemaScope screens and a capacity for 1,200 cars for each screen, with stereophonic sound given from two speakers per car. It was built for and operated by Television Theatres Inc. It was one the state’s largest theatres in the 1950’s and it was owned by Lee Theatres by 1955. It later went to a single screen operation with a capacity for 1,250 cars. It was closed on October 24, 1976

Approx. address for this drive-in was 3128 W. Belleview Ave.

Don’t confuse Centennial with South Drive-in. Two different theaters. South Drive-in was at Windermere and Bellview. Centennial was down by the Dog Track. Centennial had two screens, one North, one South. The concession was shared by both sides. Both were great theaters. I spent a LOT of time at both in the late 50’s and early 60’s.

The Centennial opened on 4/17/54. In a Rocky Mountain News article that week, the capacity of the twin drive-in was listed as 2400 cars, 1200 for each screen. I am putting together a series of books on the Denver area’s drive-ins and indoor theatres. If anyone has questions about the subject, feel free to contact me at and I’ll be happy to share my research with you. Thanks ! Ken Mitchell

From the May 28, 1955 issue of Billboard: “Newest addition to the growing chain of Lee theaters in the Rocky Mountain area is Centennial Drive-In, the plush outdoor house located on the grounds of Centennial Race Track. The purchase from TV Theaters, Inc., was announced last fortnight.”

There’s a large article, over two pages with photos, about the construction of the Centennial in the June 5, 1954 Better Theatres Section of the Motion Picture Herald.

Lem Lee will again operate the Centennial drive-in, that is, at least he finds out if the lights they are putting up for night racing at nearby Centennial race track interfere.

Centennial Drive-In, a new Denver open-airer said to be the largest west of the Mississippi, held a gala opening April 17. The project boasts a $500,000 installation of twin screens and sterophonic sound and has a capacity of 1,300 cars plus seating facilities for 500 additional customers. In addition, there is a complete kiddieland having a $500,000 miniature train installation. Site is the 60 acres of landscaped land comprising the area’s biggest race track. Owned by Television Theaters, Inc., headed by Tom Bailey, Ralph Batschelet and Gerald Schlessman, the theater received heavy publicity via radio, TV, newspapers and screen plugs in other company-owned theaters in advance of the opening. Initial attraction was “The Robe.” More than 4,000 prizes, including a Chevrolet, were given in a contest to name the theater’s concession stand. A remote TV show was also presented in connection with the opening.

At Easter, Television Theaters, Inc., opened with a new twin screen, stereophonic sound drive-in, located on part of Denver’s swank Centennial Park race track. Recently Ralph Batschelet, general manager, announced the addition of Zero’s Hollywood Circus as part of the children’s playground. The miniature circus tent will feature cartoons for kiddies who pay only a dime after being admitted to the theater free.

I’m guessing that Batschelet was sending regular notices to Billboard, since he turned up again on July 10:

Ralph Batschelet’s Centennial Drive-In, Denver, is looking for big business thru the summer as the racing season gets under way. Located on part of the grounds of the West’s most modern track, the Centennial is a natural to draw not only the regular patronage of tourists and natives, but also horsemen in town for the 100-day running season. Excellent publicity and promotion has developed good trade for the twin screen drive-in. Participating spots on local TV shows, along with passes to teen-agers participating in the shows, live acts and other gimmicks has made the Centennial formidable competition. Last week, in addition to the usual twin-feature bill. Batschelet brought in Morey Burbank, aerial artist, for an intermission act, as well as to Mr. Zero. midget employee, who takes kiddies for rides in his small car, gives them postcards and does a generally good job of appealing to the kid trade.

Batschelet was back in the Aug. 14, 1954 Billboard: “Unseasonably hot weather has boosted drive-in business in the Denver area … In suburban Littleton, Ralph Batschelet’s Centennial Drive-In is featuring lucky seven night. Every seventh car is admitted free and every driver of a car bearing a license plate with a seven on it gets in free. In addition, every car receives two guest tickets to the Centennial Race Track.”

I’ve put together a booking history for the Centennial Drive-in, from 1954 up to 1978 so far, in case anyone might like to know when a particular movie played there. I’ll be happy to share my research with you. Take care – Ken Mitchell ()