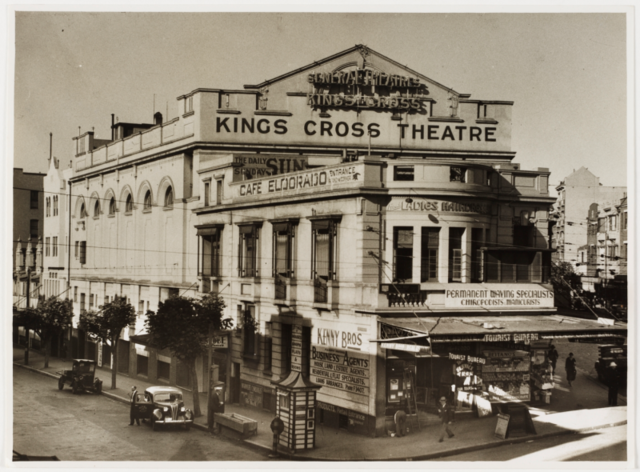 Located in the inner-city Sydney suburb of King’s Cross, at the corner of Darlinghurst Road and Victoria Street at the intersection with Bayswater Road. The King’s Cross Theatre was opened in April 1916. On 11th August 1928, American organist Joseph Wayne opened the newly installed Wurlitzer 2Manual/10Ranks organ. Other organists to play this instrument were Stanley Cummins and Denis Palmistra.

The King’s Cross Theatre underwent a remodeling in the 1937, and the organ was removed to the Savoy Theatre, Hurstville.

The King’s Cross Theatre was closed in 1963, and was converted into a discotheque. It was demolished in 1969, and today, the high-rise Chifley Hotel and some retail units now stand on the site.

The discotheque in question was the famous Surf City. It ran form 1963 until 1965 and was the home ground for many popular groups including: Billy Thorpe & The Aztecs, The Missing Links, Ray Brown & The Whispers and Chris Hall & The Torquays.

“In a few years Surf City was no more. That grand 5000 capacity theatre at the top of the Cross, where so much had taken place, was torn down. The Kings Cross underground raliway station sits directly beneath where Surf City stood, and above it one of the greatest pieces of ill-conceived, butt-ugly, cheap architectural sh*t ever built. The Crest Hotel, now the Capital. Tell me money didn’t change hads to make that sort of thing happen. Ask Juanita Nielsen!” – Billy Thorpe, 1998