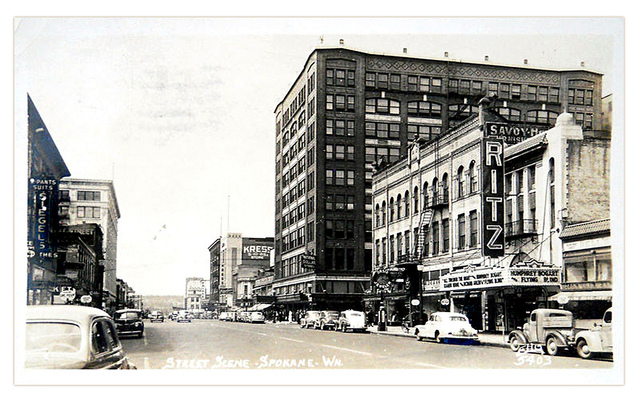 The Ritz Theatre was opened on May 10, 1924 with Conrad Nagel in “Three Weeks”. A Robert Morton 2 manual, theatre organ was installed. The narrow, three-story façade was in a simple but elegant Spanish Colonial style.

In 1962, the theatre was remodeled by a new owner, Robert Hefner, and renamed Cinema 63. Hefner intended to run the house with an art policy. It was closed on October 24, 1973 and was converted into a clothing store. Today the building is occupied by a restaurant, and above the ground floor it retains its historic appearance.

Spokane Heritage Tours has this photo (click tiny thumbnail) of Rocky Rococo, the restaurant that currently occupies the former Ritz Theatre. This site classifies the architectural style of the building as Italian Renaissance. While the facade certainly has some Italianate features, I’d say that the tiled pent roof, the narrow windows at each side, and the interesting little spired domes at each front corner (these are almost Art Deco) are all much more characteristic of the Spanish Colonial Revival style that was popular all over the western United States (and in Florida) during the 1920s.

An item in the Spokane Spokesman-Review said that part of the theater’s historic interior can still be seen in the back of the restaurant. Maybe somebody in Spokane can check it out and report on how much of it remains.

As Joe mentioned a Robert-Morton Pipe Organ was installed in 1924. This was a 2 Manual (keyboards) with a Blower Serial Number 13354. Records show another Robert-Morton Pipe Organ was installed in 1925 with Blower Serial Number 18308! Wonder if this was really done or if the records are messed up. Anyone know what happened to the organs?

Not much of the original theater remains, and I daresay that most of today’s Spokane residents would have little clue that the building was once a theater. When I moved to Spokane in the late ‘60s, the theater was still operating, under Walt Hefner’s management, as the “Cinema of Fine Arts.” I think the name was a bit of a joke — its standard fare was the sort of grindhouse flick that also played at the drive-ins around town. And yet it had one burst of greatness during that period. Not a single one of the major moviehouses in town was willing to touch “Easy Rider,” a rather controversial movie in its day — so it came instead to the Cinema of Fine Arts. The lines went down the block. I remember my parents expressing wonderment. How on earth did that tiny little theater wind up with one of the biggest movies of the year? And I remember, in the mid-'80s, interviewing Walt Hefner for the Spokesman-Review, who recalled the booking with a laugh, as a moment of triumph.

I went to this theater a few times when I was a kid. It cost 20c for kids and 50c for adults. It was clean inside and had a little better clientele than the El Rancho which was directly across the street. I never went to it after the name was changed in 1962 to Cinema 63.