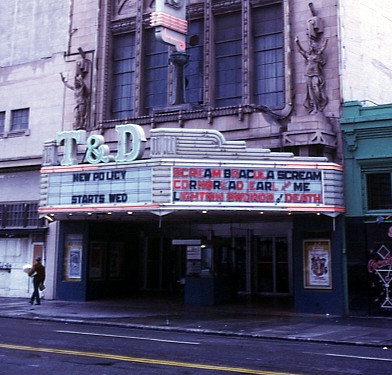 The T & D Theatre opened on November 22, 1916 with Marguerite Clark in “Miss George Washington” & Dustin Farnum in “A Son of Erin”. It was equipped with a Wurltzer Hope-Jones Unit Orchestra organ. The single balcony was reached by a series of ramps, rather than conventional stairs. The projection booth was located at the rear of the orchestra seating area. By the early-1970’s it had been renamed T & D Follies, presenting burlesque live on stage and adult movies, using the orchestra seating only. It ended its life in 1976, showing a lot of “T&A” films for an adult audience. It was demolished in 1978.

I had two cousins that lived in San Leandro in the early 1950s when I was a teenager. I would visit them on weekends once or twice a month and after my older cousin would talk his Dad into using the car, we’d go trolling, or snaking as it was referred to in those days, for broads. In order to have any chance at scoring we would cruise the streets looking for broads or go to the movies hoping to meet some broads. Consequently we were always going to movies that teenage girls liked; i.e., romance pictures, musicals; movies with their current teenage heart throb; James Dean, Montgomery Clift, Marlon Brando, Frankie Avalon, etc. We could never go to a war movie; broads definitely didn’t like war movies. After trolling / cruising the streets for a couple of hours to no avail, we quite often would go to the late show at the T&D, or the “Tough and Dirty” as it used to be called. Over the years we must have trolled hundreds of miles looking for broads; but we had to be cautious that any broads we picked up were of age, lest we’d end up with an under age “San Quentin Quail”. But we had no reason to worry. Despite the miles, the gas, and the time we spent trolling, we never scored once. Ya, the good old T&D it brings back a lot of memories of a simpler time; the good old days. But in thinking about it, the good old days really weren’t that good after all.
ick Lane (New Member)
Dick Lane

My girlfriends and I went there once to see Tempest Storm. When we walked in the manager approached us and advised us to sit upstairs so we wouldn’t get hassled by the male customers. We did. Snuck in some rum and bought cokes from the snack bar and got blitzed. We had a blast. When tempest storm came onstage she was amazing, how she had the tassles on her breasts go in different directions. This girl named Patty was topless and walked up and down the aisles banging on a drum, selling cigarettes and candy. They showed this movie called the Diary of Knockers McCalla. When we decided to leave we used the exit door of the loge on the left, there was this staircase that went down to 11th street. halfway down the stairs, there was a little apartment that was filled with strippers. We got invited in and partied until about 3 in the morning. What I remember also was above the screen was a plaster face of a woman with glowing eyes in the dark. Kinda spooky looking

Another theatre that utilized a “ramp system” to reach the balcony and fourth floor ballroom was the Hippodrome Theatre (a John Eberson design) located in Okmulgee, OK.
View link

Apparently that was never built. The article you linked mentions the “old Central Park site” at 8th and Market. According to http://www.sfcityguides.org/public_guidelines.html?article=369&submitted=TRUE&srch_text=&submitted2=&topic=Buildings%20and%20Theaters

“The four-acre lot at Market and Eighth had hosted crowds well before the Crystal Palace Market was built there. From 1874 to 1881, it was the site of the Mechanics Institute Pavilion where annual mechanics’ and manufacturers’ fairs were held. After that pavilion was demolished in 1881, the California Baseball League got its start at Central Park built on the lot. Shortly before the turn of the century, when the league outgrew the site, the park was replaced by the Central Theater, featuring touring shows and melodramas. It was destroyed in 1906, and for the next 16 years the empty “Circus Lot” hosted Ringling Brothers, Barnum & Bailey, and all the other big circuses and carnivals, plus a balloon ascension attraction.

“In 1922, brothers Oliver and Arthur Rosseau bought the four-acre site and started their fabulous bazaar. Emporium-Capwell purchased it and the adjoining property in 1925; then in 1944 it was bought by 33-year-old Joseph Long of Alameda, who in the previous seven years had started a chain of drug stores. He “modernized” the huge market by breaking up its open spaces and building a large drugstore in one corner. But postwar tastes changed as families moved out to the suburbs. On August 1, 1959, the Crystal Palace Market closed its doors and was demolished to make room for the new $8 million, 400-room Del Webb TowneHouse luxury motel.”

This article appeared in the Moving Picture World for November 18th 1916.

“Immense Organ for Oakland House – A Wurlitzer Hope-Jones Unit Orchestra costing $48,500 is being installed in the new T & D Theatre at Eleventh and Franklin Streets, Oakland, Cal., which is to be opened November 22. The delivery of this instrument at the theatre a short time ago took the form of a parade, wagons bearing the sections being covered with banners calling attention to the fact that this instrument would be the largest on the Pacific Coast and would be installed in the world’s greatest photoplay house, one with a seating capacity of more than 3,600.

The largest pipes in this unit orchestra weigh as much as a ton and are installed in specially constructed concrete chambers above the proscenium arch. A large force of workmen are busy installing the instrument in order to have everything in readiness on the opening date."

Accompanying picture can now be found in the CT photo section for this theatre.

The article about the proposed T & D Theatre in Oakland that was published in the August 28, 1915, issue of the trade journal Motography is worth quoting in full, as this was one of the earliest of the immense movie palaces that proliferated in the 1910s and 1920s to be built.

“The Turner and Dahnken Circuit of San Francisco has just completed arrangements for the immediate erection of a new theater in Oakland, to take the place of the Oakland Photo-Play, on which the lease will expire at an early date.

“A lease for 15 years has been secured on the property of the James K. Moffitt estate, southwest corner of Eleventh and Franklin streets, the lot being 100 feet on Franklin, and 175 feet on Eleventh street.

“For months, this concern has been negotiating for a site at Fourteenth and Franklin, and the change to the location secured came as a great surprise.

“Plans for a high-class motion picture theater are being prepared in the offices of Cunningham and Politeo, the architects who designed the Imperial and Alcazar theaters in San Francisco.

“This house will be the largest and most modern on the Pacific Coast, with a seating capacity of 4,000.

“There will be but one balcony and no stairs, the balcony to be reached by inclined planes only. Between the main floor and the balcony a large mezzanine floor is to be arranged with reception rooms for ladies and gentlemen, ladies' dressing room, men’s smoking room and a nursery.

“The theater will be constructed exclusively for moving pictures, the stages and flies being eliminated. An organ that will cost not less than $25,000 will be installed, and the house will be built to accommodate this instrument.

“The operating room will be a model, built on the lower floor, thus giving a straight throw to the screen.

“The interior will be most modern, with special attention paid to the lighting, heating and ventilating systems. Fresh air will be brought from above, cleansed and warmed and completely changed twelve times an hour.

“The foyers and lobby will be entirely of marble and tile. An innovation here will be checkrooms where hats, coats or bundles may be checked free.

“The auditorium will be wider in the rear than it is in front, thus affording an unobstructed view of the screen from every seat and facilitating the planning of the aisles. The aisles will be bordered with white tile through which light will shine in sufficient intensity to enable patrons to see their way.

“The exterior is designed in modern art and reflects to a marked degree the influences of the Panama-Pacific Exposition in architecture. The front will be illuminated by indirect lights, producing a soft effect that will enhance the beauty of the designs and colors employed.”Although as built the T & D Theatre had a seating capacity a bit less than the 4,000 reported in the article, I think the completed house had all the other advanced features originally proposed. The Strand Theatre on Broadway in New York City, opened in 1914, is considered by some theater historians to have been the first true movie palace, but the Strand also had one of the largest stages in New York. There might have been one or two theaters as large and palatial as the Oakland T & D that were built exclusively for movies as early as it was, but if so I don’t know about them.

11/21/16 newspaper announcing grand opening added to Photos Section, via the link below. Image will enlarge in link as well. 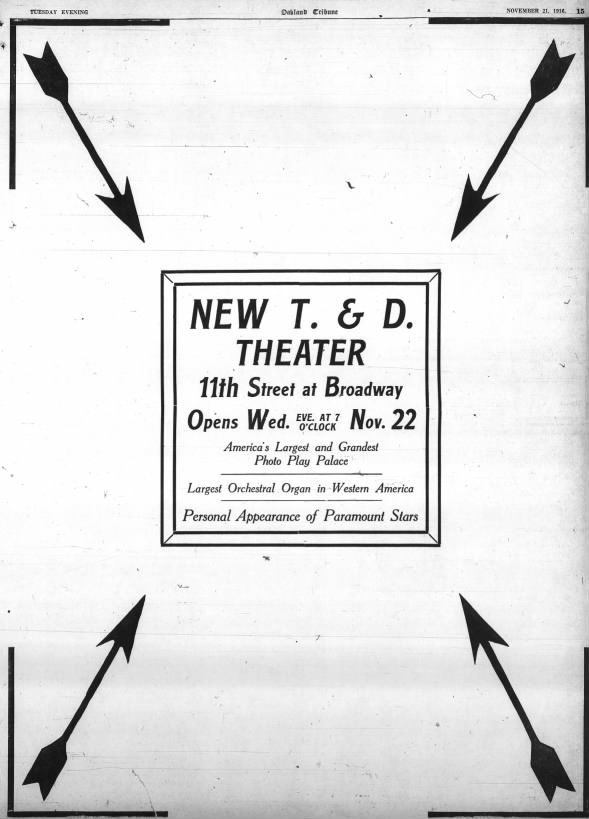 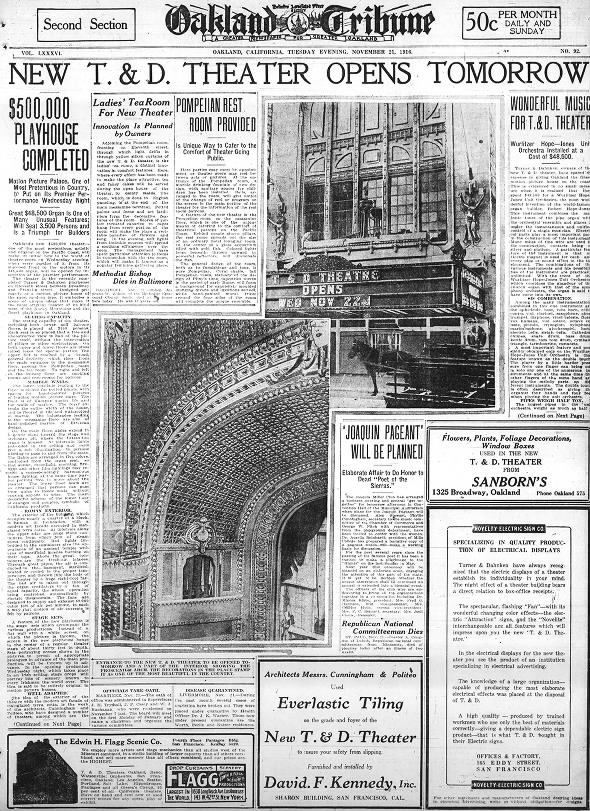