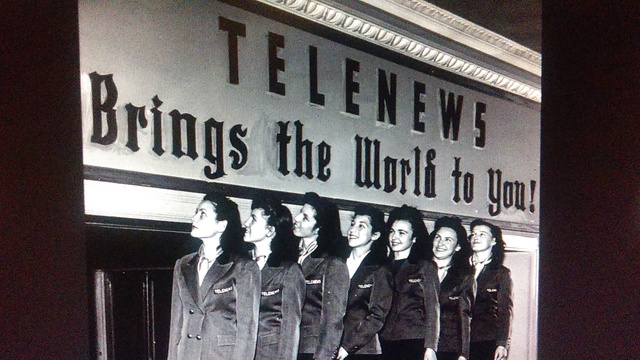 This one-time newsreel house was lost many years ago. It was one of many theaters that once lined Oakland’s Broadway. It opened as the Fox Newsreel Theatre on July 3, 1942 and was renamed Telenews Theatre on April 30, 1943. In April 16, 1954 it was renamed Globe Theatre and went over to screening feature films, with Dinah Sheridan in “Genevieve”. It was closed on March 14, 1957.

I doubt this theatre was ever operated by the Fox West Coast chain of theatres.This type of operation was not their style.

William Fox established what was probably the first Newsreel theatre in the U.S. in 1929, when he converted the Embassy Theatre in Times Square to an all-newsreel operation. The Fox company closed the house in December, 1933, and it was re-opened in 1934 by Newsreel Theatres, Inc., a company founded by two former employees of Fox’s Movietone News division.

While Fox and his partners had planned to open a nationwide chain of newsreel houses following the success of the Embassy, I don’t know that this ever happened. The depression hit, and not long after that William Fox lost control of the company. Fox Movietone News, though, continued to be a major supplier of footage to the companies such as Telenews that did operate specialized newsreel houses. This Cinema Treasures page is the only place I’ve ever heard of the Oaland Telenews having been called the Fox News Theatre.

The Telenews chain opened its first theatre, the San Francisco Telenews, in September, 1939. Telenews ran footage from the newsreels of all the five major companies, but they were cut together and supplemented with local footage by the managers of the individual theatres. An article about the Telenews company was published in a scholarly journal a couple of years ago, but I’ve never read it as you need a subscription to do so.

However, an interesting bit of background dug up by the Dallas Historical Society for one of the authors of the article can be read online right here.

Joe, Your above story is very interesting. I worked for that chain for so many years, but had never known Fox was into that type of exhibtion. Just of course his beautiful palaces he either had built or bought from other exhibitors. I do remember being in SF one time with my uncle and we were on Market St., we were in the area of the old Telenews Theatre and I insisted on going in there. So he bought the tickets and went inside. After about 5 minutes I was bored and wanted to leave. I remember it being a small theatre and sort of dumpy. Needless to say I never asked to go there again. ( I was probably abour 10 years old then!).

The May 1, 1954, issue of Boxoffice ran a brief item noting that the Oakland Telenews Theatre had been renamed the Globe Theatre, reflecting its change from a newsreel house to feature films, which had taken place in December, 1953. The theater was still owned and operated by Telemanagement, the company that operated the Telenews circuit. 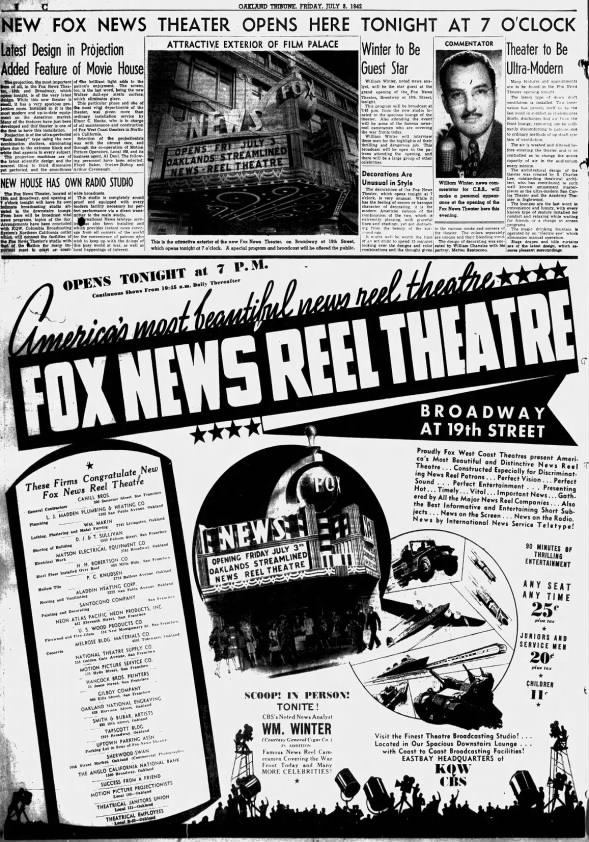 April 30th, 1943 reopening as Telenews ad in the photo section.

Interesting that the marquee of the Fox Newsreel in Oakland was so similar to the marquee on the Los Angeles newsreel house that later was also renamed the Globe Theatre. Both featured a globe, which probably suggested the new name after the houses were switched to regular movies. I wonder if there were other Fox newsreel houses that featured globes on their marquees?