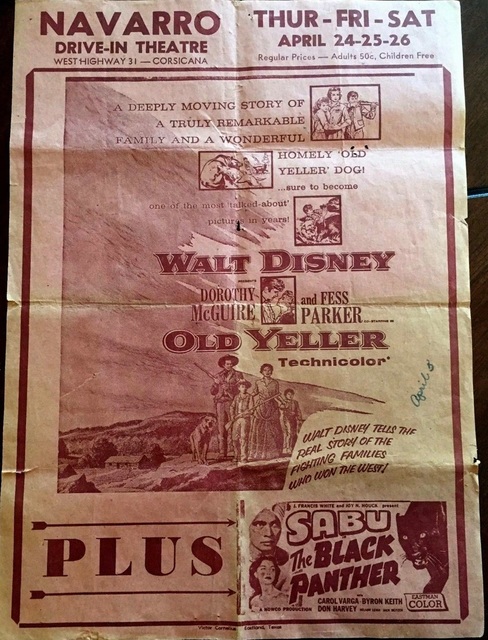 Located in Corsicana, Texas, it was one of two drive-in theatres operating in this small Texas town. The Navarro Drive-In opened August 6, 1948 with Thomas Mitchell in “Swiss Family Robinson”. It held 304 cars in its single screen, and was initially owned by Damon Frank and by 1953 it was owned by B.L. Hagle and Cliff Turner. A second screen was opened September 20, 1973.

In 1999 the Concession stand was still standing, it had been used as a driving school.

thanks Bob,So many Drive-ins to get on.

After looking at the Aerials in that area, it looks like it was only a Single Screen Drive In. Any thoughts on this?

The grand opening for the Navarro Drive-In which launched with “Swiss Family Robinson” was on August 6, 1948. The 10-acre site was purchased by Maurice Cole of the Texas Drive-In Theatre Operators circuit. The Navarro would come close to delivering its twin screen in time for the 25th anniversary. It narrowly missed advertising as “Second Screen coming soon” in its ads. The Navarro hired Glenn Vaughn away from the Corsicana Twin Cinema – former Jerry Lewis Twin Cinema – giving the Navarro an experienced hand managing a dual-screen operation. Screen two / the Twin launched Sept. 20, 1973 with “Paper Moon” and “Bad Company” while a Burt Reynolds and Clint Eastwood double feature played on the original screen.

Although the ramps are faint, it can be seen that in the back of the property another screen was present. https://goo.gl/maps/wrjdD

Since at least, 2019, nothing remains of this drive in.. Both old structures have been demolished.. RAC Photography