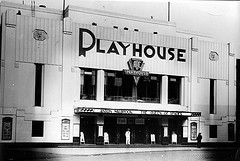 Architect Robert Cromie designed the Playhouse Theatre for the independent Lou Morris chain. Interior decorations were by interior designers Mollo & Egan (their first cinema project). The Playhouse Theatre was opened on 26th October 1931. It was built for a mixed use of theatre and cinema and had a large stage, which was used extensively over the years. The proscenium was 50 feet wide, and there were six dressing rooms. The Playhouse was equipped with a Compton 3Manual/8Ranks organ. The Playhouse also had a café/restaurant for the convenience of its patrons. It was taken over by the Associated British Cinemas(ABC) chain on 6th May 1935.

Re-named ABC in 1963, it was closed as a cinema on 11th December 1970, when Tesco supermarkets were proposing demolition to build one of their supermarkets on the site. This never happened and it was converted into a bingo club, last operated by Mecca Bingo Clubs. In recent years, they have built a new purpose-built bingo club in the town, and closed the ABC/Playhouse building in March 1999. It stood empty until it was demolished in 2002. A Wilkinson’s hardware store has been built on the site.

Very true Ian,very nice looking cinema,too bad it has been torn down.

I started my ‘working’ life at this cinema in 1959 as a trainee projectionist and can well remember climbing the ladder onto the roof on many occasions. If anyone wants any information about the place I will be happy to help.

Hi Mr Lake, I was wondering if you were still local to Dewsbury and if it would be possible to get some info on The Playhouse? My email is any information regarding the Playhouse would be of great use for a project i’m working on at present. Many thanks Simon Dewsbury.

Some photos of the demolition:– http://www.flickr.com/photos/electron1944

Hi Ron Lake, I wanted to ask you when the film Spencer’s Mountain was shown at the ABC Cinema, I think it was sometime in 1963 – I’m trying to track down a photograph taken outside the cinema as only those named Spencer were invited to see the film!! Best wishes Jane

My former Manager at ABC Wigan and good friend, John McIntosh was the very last Manager at the ABC Playhouse when it closed in 1970 with a live production presented by DEWSBURY COLLEGIANS AMATEUR OPERATIC SOCIETY in the December of that year. There were, however, no One Night Stand Pop Concerts on the stage of the Dewsbury ABC as it was barred by Leeds and Bradford from presenting such shows……..

Occasionally on a Saturday Morning at the ABC Minors personal appearances were made on stage by celebrities of the day such as Peter Firth and David Bradley aka'The Flaxton Boys' which was a very popular TV Series produced by Yorkshire Television between 1969 and 1973.

I have read that the building was used for pop concerts at one point Would you say this is not true? Many thanks Simon

I am sorry that it has taken so long to respond. At one time Cinema Treasures used to inform me via my linked e-mail address of any replies to comments but they have ceased doing so for some reason.

My assertion on this site re the ‘pop’ shows was as a result of my former Manager, John McIntosh’s direct appeal to me to do so on his behalf and I suppose that I should have said this.

He was Manager at the ABC Playhouse from 1967 until its closure by EMI in 1970 following its sale to Tesco who had made an offer that could not be refused. There were certainly no pop concerts during John’s term of office and he was aware of none during the previous Manager, Bill Spinks' time there either.

The conversion to a supermarket failed to proceed after it was ascertained that there would be problems with deliveries etc. The building then stayed shuttered and empty until its acquisition by Mecca for bingo which preserved the place until they pulled out. This is now happening country wide as new purpose built venues supersede former cinemas. I never thought that I would say this but I think it is a great shame as at least the places still existed with their architectural features largely intact in most cases.

Hi Terry, thanks for your reply, I didn’t mention in my documentary about pop concerts as I couldn’t find any confirmation of this, the playhouse was featured in my DVD “memory lane Dewsbury” it features internal and external old video of the playhouse when it was used for bingo. More info here www.simonreedproductions.com Many thanks Simon.

The interior design of the Playhouse was by Mollo & Egan. This was their first theatre to be designed by them after becoming a Partnership. They met whilst working for Marc Henri & Laverdet in 1930 who were decorating the Astoria Streatham. Michael Egan was employed as a Draughtsman and Eugene Mollo as head of scenic design.