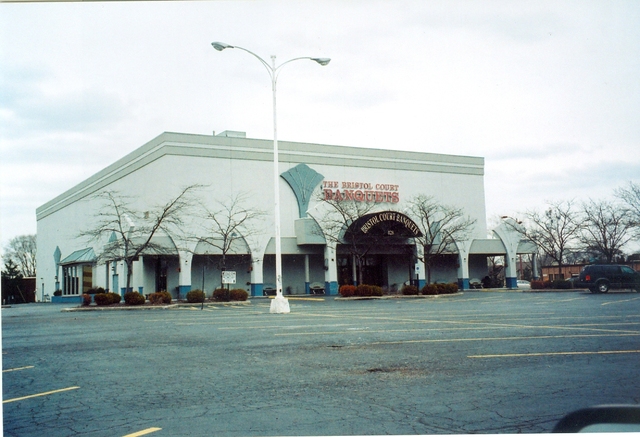 This theatre was a General Cinema, opened on November 1, 1963, 2 years ahead of the Randhurst Cinema. It attemped to break from previous stage-centered theatres with a 62-foot screen, curved walls, ceiling, and floor, and push-back seats. It also used something called a "color curtain" (presumably a light wash) in place of drapery. It was split into two screens in October 1973. It closed in late-1983 and was remodeled into a banquet hall, which it remains today.

Opened with THE THRILL OF IT ALL! with Doris Day & James Garner.

Claimed to have “THE LARGEST SCREEN IN THE MIDWEST”.

Ah, finally, this theater gets a little love with a page of its own! I have such fond memories of this General Cinema probably because I saw my very first movies there: Star Wars, Herbie Goes to Monte Carlo, For the Love of Benji, Pete’s Dragon, The Cat from Outer Space, Return from Witch Mountain, Candleshoe, The Jungle Book (re-release), Hot Lead & Cold Feet, to name a few. Yes, I was a little kid then (hence the Disney heaviness), so maybe my memories of it are nicer than it actually was. But I remember it as clean, and being decently sized theaters (I understand it was originally one screen and twinned later on). Even though I was so young, I can recall the audience booing at Darth Vaderâ€™s entrance, and kids clapping along to the jazzy General Cinemas theme song (you can see the bumper here: View link) I lived in Northbrook, but back then, movie theaters only had 1-3 screens, so it was not unusual to drive a few towns over to see what you wanted. I drove by the place not too long ago, and the memories came flooding back. Iâ€™m a little surprised my parents took the time to haul us all the way out there. It is now a now banquet hall, but I could still recognize how it appeared then. Iâ€™m surprised it closed in â€™83â€¦longer ago than I thought! How time flies. I know I saw Jaws there on a re-release, and some of the last few films I attended included Halloween II and Star Trek II: Wrath of Khan.

Thanks billymac72 from an old GCC employee in Georgia.

You’re welcome! A lot of fun to reminisce about those early movie memories.

I uploaded the 1963 grand opening ad in the photo section for this theatre.