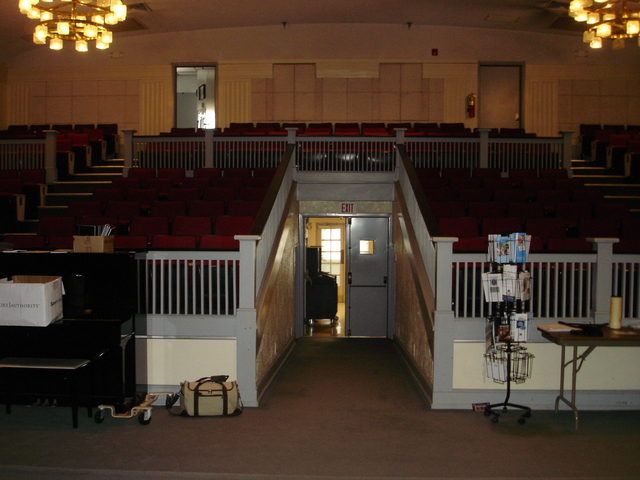 This appears to be the theatre-

That is right nice post theatre. I remember the old one on Fort Gordon,Ga, it was white and made of wood. Pretty ugly until they got a new modern one in the late 60’s or early 70’s,Ian.

The one universal constant is that everything has a beginning and an end. Certainly this was case with the Armyâ€™s Fort Benjamin Harrison. With the exception of the Finance Center and PX/Commissary, Fort Harrison is little more than a memory as the former Federal installation was reconfigured for civilian use. One of the casualties was the Army/Air Force Exchange Service (AAFES) theater.

The Fort Benjamin Harrison AAFES (pronounced A-FEES) theater was typical of the movie theaters found on military bases in the 1980s. Military cinemas were multi-purpose facilities complete with full stages. In addition to movies they often hosted military briefings and religious services. These theaters primarily screened second run movies. There was normally a two or three month lag between a movieâ€™s release date and its appearance at military theater. Some of this was certainly cost related as AAFES cinemas only charged a couple dollars for a movie. The other component was that in the United States AAFES was regulation bound to avoid competing with cinemas in the local market.

The Fort Harrison cinema was a single-screen theater with the main speaker positioned behind the screen. There were additional speakers retrofitted to the walls. The projectionist wore several hats in that he sold the tickets, manned the snack stand and ran the movie. This arrangement worked as the Fort Harrison theater rarely hosted a packed auditorium. However when there was a line of people outside the theater the line would sometimes stop moving for five minute intervals as the solitary AAFES employee temporarily abandoned the ticket window and devoted some time selling candy, soda and popcorn. As many soldiers paid by personal check the process slowed even further.

The AAFES theater at Fort Harrison was next to the Post Exchange (PX) and conveniently across the street from the post bowling alley and diagonally across the street from the Green Bank where I frequently stopped to get pocket money from the ATM. Five dollars would cover the cost of admission, a large soda, bucket of popcorn and large sized Hersheyâ€™s chocolate bar. My 1984 memories of the Fort Harrison theater are that it was open for business the latter portion of the week, as well as over the weekend. When I was at Fort Harrison movies were limited to single showings per evening. Likewise there were no late night screenings unlike AAFES theaters at larger military bases.

I went to quite a few movies at the Fort Harrison theater, though I had previously seen many of the films at first-run theaters. I do recall going to see THE RIGHT STUFF, TANK, POLICE ACADEMY and ICE PIRATES at the cinema.

The coming attractions trailers were not always in the best shape and often advertised films that would never find their way to the military cinema. The one thing I always enjoyed about military cinemas was that show was always preceded by a short film featuring the Star Spangled Banner backed with patriotic military scenes. The National Anthem always elicited cheers from the audience.

The one drawback of going to an AAFES theater was that there were often young soldiers in the audience who had no sense of movie theater etiquette. These guys would often yell at the screen and carry on loud and profanity ridden conversations with their buddies during the feature film. One time there was even a soldier who toted an enormous boom-box over his shoulder and continued to play music well into the start of the main feature.

The Fort Benjamin Harrison AAFES theater closed in the mid 1990s at the same time military post was inactivated and largely handed over to the local community. Although the PX and Commissary remained open for several years (pending the completion of the new shopping complex built on the site of the former Army hospital) the AAFES cinema was torn down. For years the general outline of the theater could still be traced on the ground, but this disappeared once the PX relocated.

Thanks SPOK,a very good write up on Army Theatres,something that we usually don’t get this kind of write up on Military Theatres.

Not demolished, just the wrong Fort Harrison theatre. The Army built a strip mall for the new commissary and PX and included a small new movie theatre in it. However, the original theatre built in 1929 continues to stand because it was reused as the home of the 74th Army Band and later, the 38th Infantry Division Band. Still occupied, still in use, never demolished. No movies, however.

Wow what an amazing story!

Please correct the caption underneath this 1929 theatre. This theatre, still in use as a band hall, was not built in the 1970’s, nor destroyed. SPOK has a very nice story about a theatre built into the strip mall that housed a newer Army theatre, but this is not it.